Seth Meyers mocks Katrina Pierson: She's like 'a zookeeper when the monkeys start throwing their sh*t' 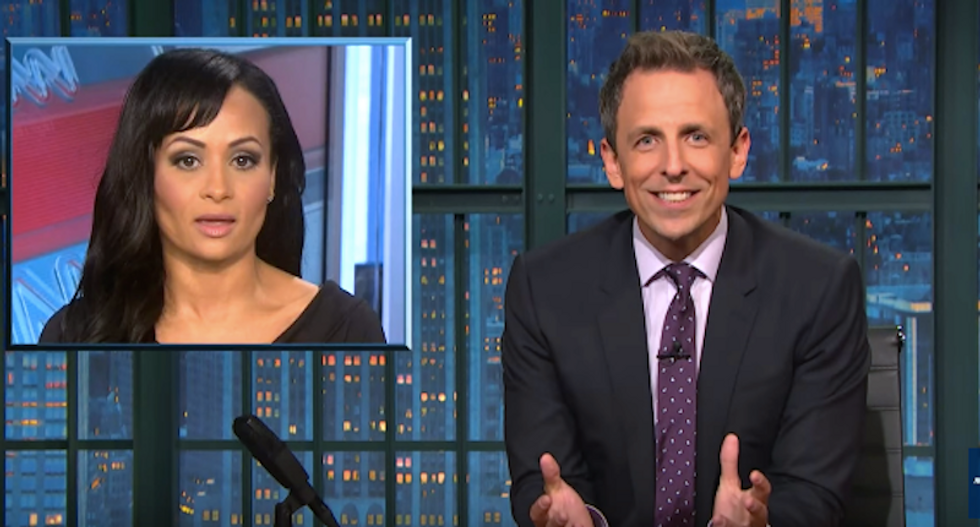 Donald Trump is allegedly "softening" his pitiless anti-immigration stance -- a narrative that's both inaccurate and, according to Seth Meyers, revolting.

"That's right, Trump is softening -- also known as flip-flopping," Meyers said. "He's softening and flopping, he's really sagging in the swing states. You see, his poll percentage is down, and he can't seem to get it up. He can't get any penetration -- ugh, I do not feel good doing this."

Trump has, at least verbally, reversed his position from just over a year ago, when he told NBC's Chuck Todd that undocumented immigrants and their children "have to go."

Now the Republican presidential nominee is trying to draw a murky distinction between "good" immigrants and "bad ones" -- although his hapless spokeswoman Katrina Pierson insists Trump's not changing his position, but only "the words that he is saying."

"What does that even mean?" Meyer said. "That's like saying, 'I'm not breaking up with you, I'm just living in a different house with another woman, and we have three kids.'"

Meyers admits Pierson has a thankless job working for a prolific Dumpster arsonist.

"Is there any job worse than spokesperson for Donald Trump?" Meyers said. "It's like being a zookeeper when the monkeys start throwing their sh*t at people. 'No, that means they like you.'"

Coulter, who recently published the book, "In Trump We Trust," complained that the Republican presidential candidate's new stance would alienate her and other supporters.

"To be fair, when you write a book called 'In Trump We Trust,' you are just asking for that to blow up in your face," Meyers said.