Stephen Colbert delights over reports Trump might quit: 'It's funny because God I hope it's true' 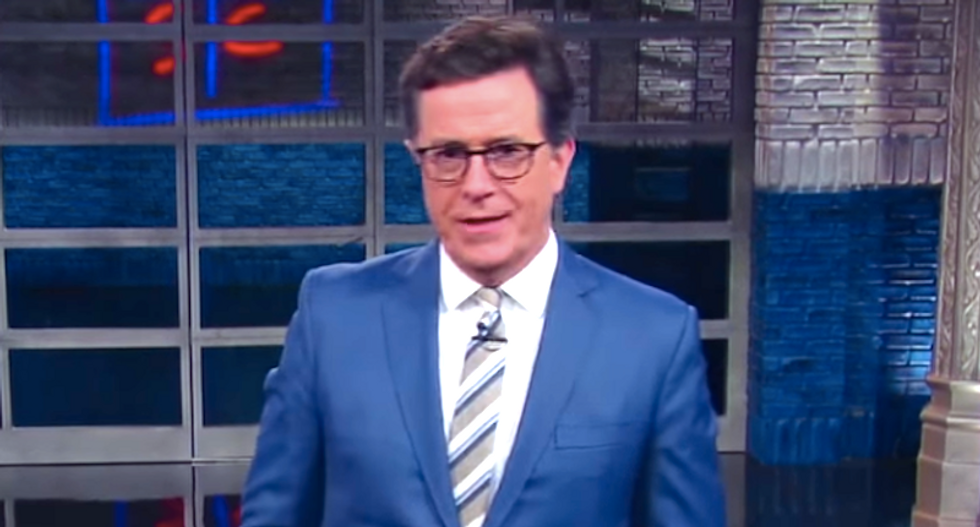 The week after the Democratic National Convention has been horrible for Donald Trump, who has lashed out at Gold Star families, babies and fellow Republicans as he sinks in the polls.

Stephen Colbert said the GOP nominee was "ridden hard and put away wet this week," and Trump's campaign staff is reportedly "suicidal" over recent developments.

"They would jump off the building, but they're afraid they would see the word 'Trump' on the way down," Colbert said.

Trump, of course, denies anything is wrong and says his campaign is more united than ever.

"Yes, the campaign is all united and right behind him, just like in the movie -- what's that movie? -- uh, 'Human Centipede,'" Colbert said.

Trump's campaign manager, Paul Manafort, may have accidentally revealed too much during an interview Thursday with CBS News, when he was asked whether he supported House Speaker Paul Ryan.

"I support him as a speaker, and I know after next week I'm going to be supporting him as a candidate for president, too," Manafort said, and then chuckled.

Republicans reportedly believe Trump might quit the race for president, after winning the party's nomination just two weeks ago, and they're scrambling to determine how to replace him on the ticket.

"It's funny because, God, I hope it's true," Colbert said.

Trump did raise $82 million last month, according to reports, much of it from small donations between $10 and $25.

"They can feel good knowing that every dollar will help Donald Trump reach his ultimate goal: attack ads against Paul Ryan," Colbert said.

Some of those donations may have been made in error, such as the Trump supporter who told CNN he signed up for a recurring contribution on the candidate's website but was unable to find a way to stop those payments.

"Supporting Trump is like joining a gym, only it's democracy that isn't working out," Colbert said.