Stephen Colbert: Draft-dodging Trump deserves a Purple Heart — for shooting himself in the foot 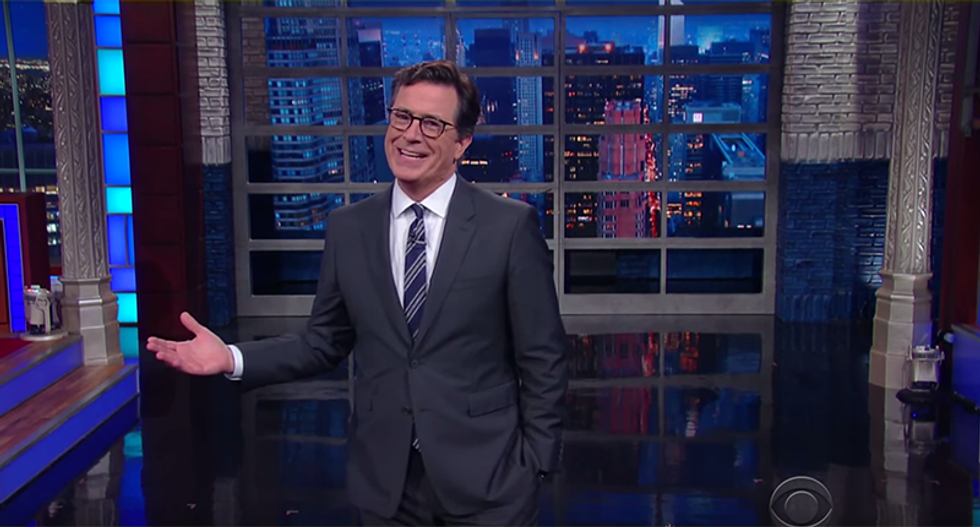 Every day, Stephen Colbert comes to work and makes an active effort not to mock Republican nominee Donald Trump. But then Trump either opens his mouth, his family speaks out or someone associated with his campaign does something incredibly stupid.

"Every day, more words come out of his face," Colbert explained.

First, there is Roger "Uncle Touch Too Much" Ailes. When asked about what Trump would do if his own daughter was sexually harassed, Trump said Ivanka would just find another company to work for. "Yeah! Is that so hard?" Colbert asked. "When a woman is sexually harassed it is up to her to simply leave that company and find a new job at all those other companies where women are leaving for some reason. It's musical chairs. When the music stops, you have to sit on your bosses lap." Then Eric Trump made matters worse.

It's all easy for Trump to say, his daughter has only been working for him, so she can't be subjected to sexual harassment. Well, except for that one time he said he'd date her if she wasn't his daughter.

Colbert acknowledged that Trump has had such a rough couple of days since the Democratic National Convention that he deserves a medal. Then, of course, he got one, when a veteran handed over his Purple Heart. Trump said, "I always wanted to get a Purple Heart. This was much easier." Given his problems with veterans and the huge scandal involving the Khan family, he's drawing serious criticism.

"Yeah, he's, uh, did you hear that? He's always wanted a Purple Heart, ya know," Colbert began. "He always wanted the award you get for being wounded in battle, he just never had the opportunity. Man, he must kick himself over those five deferments he requested from the Vietnam draft. What are the odds?!" Colbert speculated that perhaps Trump could score a medal for accidently shooting himself in the foot. He's certainly done it a lot in the last week.

To make matters worse, President Barack Obama came out Tuesday to denounce Trump in words that a sitting president has never said before: "He is unfit to serve as president."

Colbert reminded us that Trump doesn't care if the "establishment" thinks he's "fit" for the "job." After all, "he's a 'man' of the people," he continued. Perhaps that is why Trump tweeted a photo of himself eating Kentucky Fried Chicken on board his private jet. But Trump managed to bumble that too, as he was eating his fried chicken with a knife and fork.

"Excuse me!" Colbert said, with a furrowed brow. "Mr. Trump, what part of finger lickin' good don't you understand?" He also suggested that if Trump wants to seem relatable, then perhaps he ought to not eat his KFC on a private jet.

As if that isn't enough, at his most recent rally, Trump heard a baby crying. As if he was suffering from some sort of demonic possession, Trump said he loved babies and not to worry about the baby crying. Then in the next beat, he threw the baby out. "If that baby wants to stay here he needs to act like an adult!" Colbert mocked. "Because when we adults listen to Trump we weep silently."

John Eastman revealed Friday in a court filing that he routinely communicated with Donald Trump either directly or through "six conduits" in the weeks ahead of the Jan. 6 insurrection.

The right-wing attorney asked a federal judge to maintain attorney-client privilege over his work for the former president, and the late-night filing gave the clearest view yet of the communications between Trump and the battalion of attorneys and allies helping his effort to remain in power despite losing the election, reported Politico.

The heart-rending case of a woman denied an abortion by four hospitals despite the fetus having an aggressive tumor has sparked an outcry over women's rights in largely Catholic Croatia.

Despite the procedure being legal in the European Union member, Mirela Cavajda is now being forced to have a termination in neighboring Slovenia.