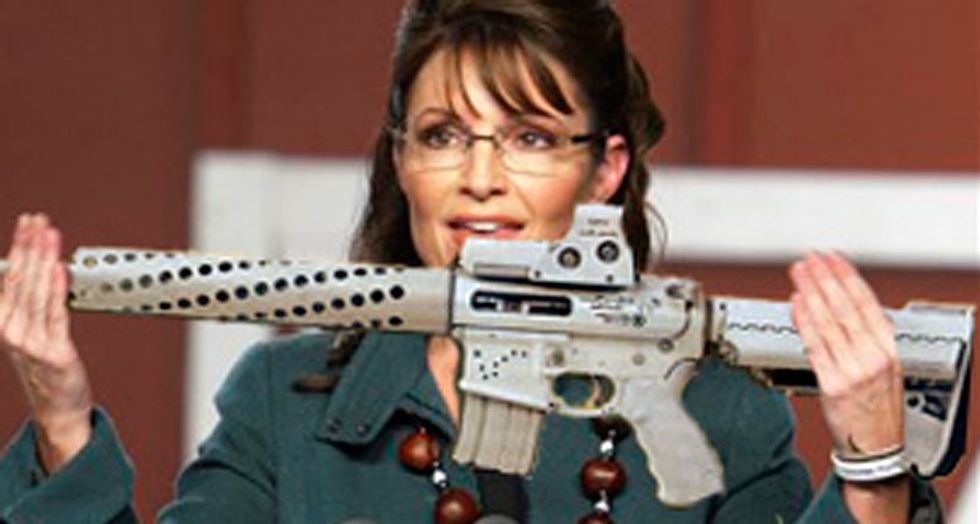 Donald Trump drew widespread condemnation -- and the attention of the U.S. Secret Service -- after apparently threatening political violence against his rival, Hillary Clinton.

The Republican presidential candidate suggested that "Second Amendment people" could stop Clinton from appointing pro-gun control judges after she's elected, although his campaign tried to claim his comments were meant only to rally pro-gun voters to support Trump in November's election.

But his comments are part of a widespread belief that the Second Amendment covers the right of gun-owning Americans to use violence to settle political disagreements their First Amendment rights can't solve.

That belief is promoted on the T-shirt rack at any gun shop or Army surplus store, and it's broadcast on bumper stickers parked outside gun ranges and other places where "Second Amendment people" gather.

The notion of constitutionally protected political violence is also promoted by Republican lawmakers and candidates, as well as influential lobbyists and anti-government activists.

NRA chief Wayne LaPierre has offered many variations of that interpretation of the Second Amendment, which he claims could be used to fight perceived tyranny and overturn voting results. “Our Founding Fathers understood that the guys with the guns make the rules," he said in 2009, at the Conservative Political Action Conference.

GOP House candidate Robert Lowry held a campaign event at a Florida gun range in October 2009, where he fired gunshots at a silhouette that had his opponent Rep. Debbie Wasserman-Schultz's printed on it.

Brad Goehring, who ran for the California statehouse, referred to "liberal hunting permits" that are sold as novelties at gun shops in a May 2010 Facebook post. "If I could issue hunting permits, I would officially declare today opening day for liberals," Goerhing said. "The season would extend through November 2 and have no limits on how many taken as we desperately need to 'thin' the herd."

Jesse Kelly, who ran against Giffords before she was shot, held a campaign event in June 2010 at a local gun shop. "Get on Target for Victory in November. Help remove Gabrielle Giffords from office," read an advertisement for the event. "Shoot a fully automatic M16 With Jesse Kelly."

Oklahoma Republican John Sullivan told a town hall audience in February 2012 that the only way Rep. Paul Ryan's budget proposal would pass is if some Democratic lawmakers were shot. "I live with some Senators, I yell at them all the time, I grabbed one of them the other day and shook him and I’d love to get them to vote for it — boy I’d love that," Sullivan said. "You know but other than me going over there with a gun and holding it to their head and maybe killing a couple of them, I don’t think they’re going to listen unless they get beat.”

Sen. Joni Ernst said in August 2012, when she was running for office, that she would use her gun to protect herself from the government. "I do believe in the right to carry, and I believe in the right to defend myself and my family — whether it’s from an intruder, or whether it’s from the government, should they decide that my rights are no longer important," Ernst said.

Mike Vanderboegh, founder of the III Percent gun militia and an influential speaker in the right-wing patriot movement, told open carry advocates that the Second Amendment and the Bible called for them to use gun violence against their political enemies. "Failing all other appeals to peaceful means, that the founders’ solution to such tyranny is still available, still potent, and still waiting, for when democracy turns to tyranny, the armed citizenry still gets to vote,” Vanderboegh said, as the crowd cheered wildly.

Larry Pratt, the executive director emeritus of Gun Owners of America and former Virginia lawmaker, made remarks strongly similar to Trump's in May 2016, when he warned that Second Amendment rights could be threatened if liberals gain a majority on the high court. “Their decisions, unlike the Roe v. Wade usurpation, don’t extend to the whole of society, they’re not supposed to, and we may have to reassert that proper constitutional balance, and it may not be pretty,” Pratt said. “So I’d much rather have an election where we solve this matter at the ballot box than have to resort to the bullet box.”