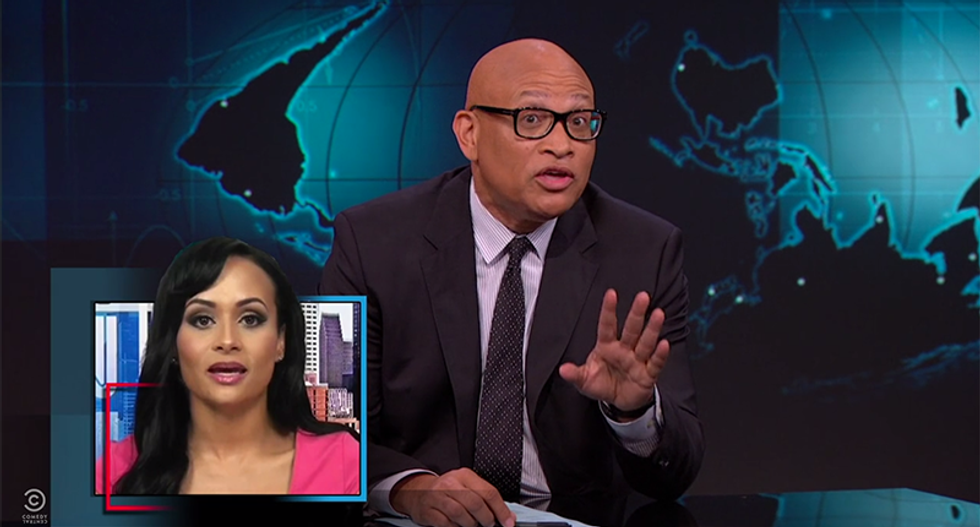 Larry Wilmore didn't mince words in his Wednesday episode of "The Nightly Show." The comedian showed the clip of Donald Trump's latest controversy, claiming that a few weeks ago "we thought it couldn't get worse" than Trump's attack on the Gold Star family. Then Trump made comments encouraging Second Amendment supporters to do something if Hillary Clinton gets elected.

"At this point, if you vote for Trump, you're just a d*ck," Wilmore said, to thunderous applause from his audience. "I'm sorry, I'm sorry. I hope you get destroyed by a horse-sized duck. How's that?"

He insisted that there is no possible way it could be misinterpreted, but "Trump's chief spokesgoblin, Katrina Pierson" brought amazement to Wilmore as he "watched the bullsh*t pour out of her mouth." In a CNN appearance, Pierson claimed it was about Clinton and gun control. CNN's Jake Tapper noted that Trump was talking about what Second Amendment supporters could do if she won. Pierson disagreed.

"Okay, let me stop you right there. F*ck you, that is what he was talking about! I don't care how convoluted your explanation. We're not stupid! We can hear! Stop trying to explain him away."

Rep. Duncan Hunter (R-CA) tried to explain Trump by saying that he isn't the most eloquent of speakers, "Let's say Trump's an English professor with a Ph.D. in grammar."

Wilmore stopped the clip right there trying not to laugh. "First of all, he can't get a Ph.D. for a subject that's taught in the fifth grade, okay? That's like getting a bachelor's of science in kickball or something. And just to be clear, your argument is that Trump is so incoherent he can't be held accountable when his words might constitute a federal crime."

Then there's the "human embodiment of impotent rage himself Rudy Giuliani," who blamed the entire incident on "the Clinton spin machine." Wilmore that it again presupposes we can't hear what Trump is actually saying. "Like he's blaming us for hearing exactly what Trump said. And here's what really gets me about this: Giuliani is diminishing the power of Trump's words, yet he's not always so calm about language," Wilmore said, showing a clip of the former New York mayor blaming the Black Lives Matter movement for the police shootings in Dallas.

Wilmore noted the hypocrisy was obvious. "So, when Trump calls for the violent death of his opposition, that's just Clinton spin. But when it's Black Lives Matter, they're literally killing people with the power of their 'hypnotizing Negro language,'" Wilmore said in air quotes. "Look, the difference between some random protester and someone running to be the leader of the free world is that once you're president, everything you say has meaning."

"I don't care how they spin this, stop being so careless with your language," Wilmore concluded.