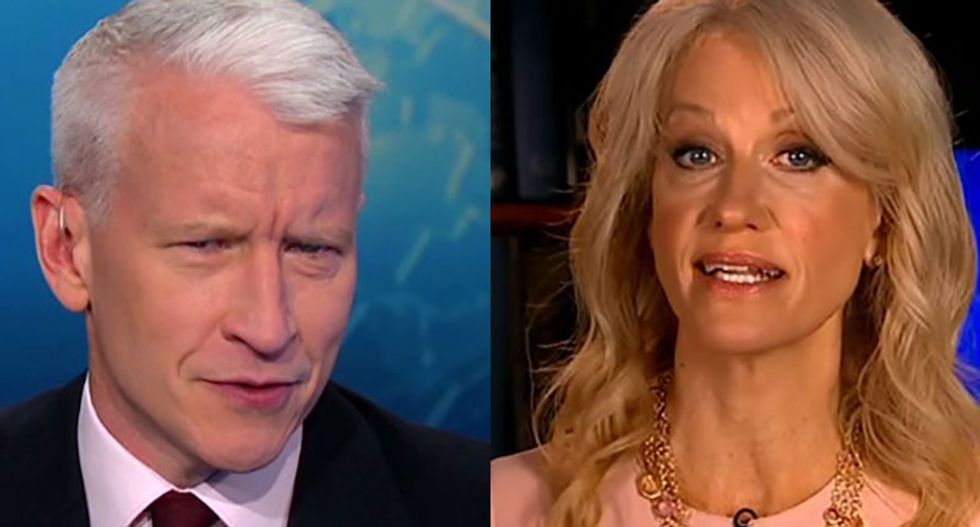 Kellyanne Conway, like other Donald Trump campaign representatives, has gained a reputation for making wildly fact-free claims to defend her boss.

But she's been doing that for years, as videos newly unearthed by the Democratic Coalition Against Trump have revealed.

The GOP pollster tried to change the subject during an Aug. 21, 2012, appearance on CNN by falsely claiming there'd been a rise in the number of sex-selection abortions in the United States -- and that Democrats promoted the practice.

"The Washington Post reported on Aug. 10 that there are Democrats who are going to the convention in Charlotte who want their plank expanded," Conway said. "They feel that it’s too draconian. It doesn’t allow for partial birth abortion bans. It doesn’t ban sex selection. You’ve got all these little baby girls being killed just because they’re girls in this country."

Host Anderson Cooper interrupted incredulously: "Wait, what? Excuse me, where is that happening?"

Conway said Planned Parenthood data, which she said had been collected in a Guttmacher Institute report, showed that sex-selection abortions were not uncommon -- and she urged the U.S. Congress to pass the Prenatal Nondiscrimination Act.

"The House just passed a bill to ban that," Conway said. "I’m not sure it ever went to the Senate, and I’m sure President Obama would veto it if it was put on his desk."

Critics say that bill, which lawmakers considered earlier this year, was a "wolf in sheep's clothing" that twists feminism and uses racial stereotypes about Asian immigrants to restrict abortion rights.

"But statistically, there’s not really much evidence that that is actually occurring in the United States," Cooper said. "Amongst some immigrant groups in small numbers it may be occurring but in no statistical measure is it significant."

Conway urged Cooper to look at Guttmacher Institute’s statistics, so during a commercial break, he did.

"Before the break, Kellyanne, you mentioned the Guttmacher Institute information on sex-selective abortion in the United States," Cooper said. "Here’s what they actually say in a May 30 press release titled 'Sex Selective Abortion Bans: A Disingenuous New Strategy to Limit Women’s Access to Abortion.'"

"The study acknowledges the practice does go on overseas, as we mentioned, and perhaps in certain Asian-American communities in the United States in small numbers," Cooper continued. "But, quote, 'In the United States, meanwhile, there is limited data indicating that sex-selective abortion may be occurring in some Asian communities. Although the U.S. sex ratio at 1.05 males for every female is squarely within biologically normal parameters.' So I just wanted to put that out there."