'C'mon, this is so beneath you': CNN guest shames Scottie Nell Hughes for trashing Alicia Machado 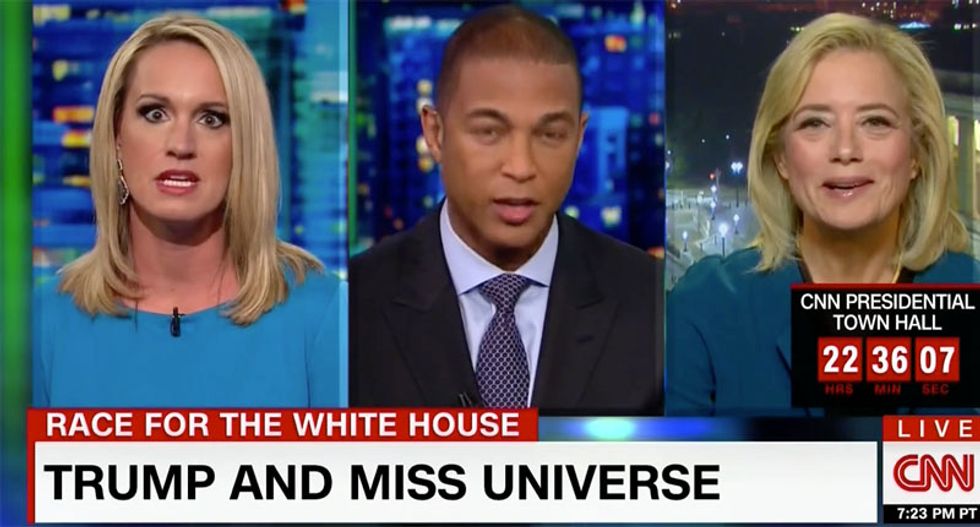 After a morning of playing defense over GOP presidential nominee Donald Trump's abusive history with former Miss Universe Alicia Machado, his campaign went into attack mode Tuesday night, with a CNN-paid Trump surrogate attacking the beauty queen for gaining weight -- only to be called out.

Appearing on CNN with Don Lemon, Trump advocate Scottie Nell Hughes advanced the smear campaign against the beauty queen -- sneering at an appearance in Playboy magazine -- and giving a hint of what is likely to come from Trump spokespersons in the next few days.

As Hughes alternately complained about Machado gaining weight, only to turn around and say men shouldn't talk about it, Democratic activist Hilary Rosen jumped on her saying, "Scottie, c'mon this is so beneath you to defend this."

Asked about Trump referring to Machado as "Miss Piggy" and "Miss Housekeeping," Hughes at first stated that it was unacceptable-- then  launched her own attack

"No man should ever make those comments, but people who live in glass houses shouldn't throw stones," she stated. "This cookie is going to crumble real quickly as we find more about her history, her past, we've already talked about a judge that she threatened down in Mexico, a Playboy magazine that she did, she had a problem with a fiance she broke up with on a reality show."

Rosen slammed the coordinated attacks, saying, "The fact that his surrogates are on TV trashing another woman like this is just kind of appalling, and says everything you need to know about how the Trump campaign is operating right now."