CNN's Jake Tapper slams Trump's advisors: 'He is surrounded by the Philanderer's club' 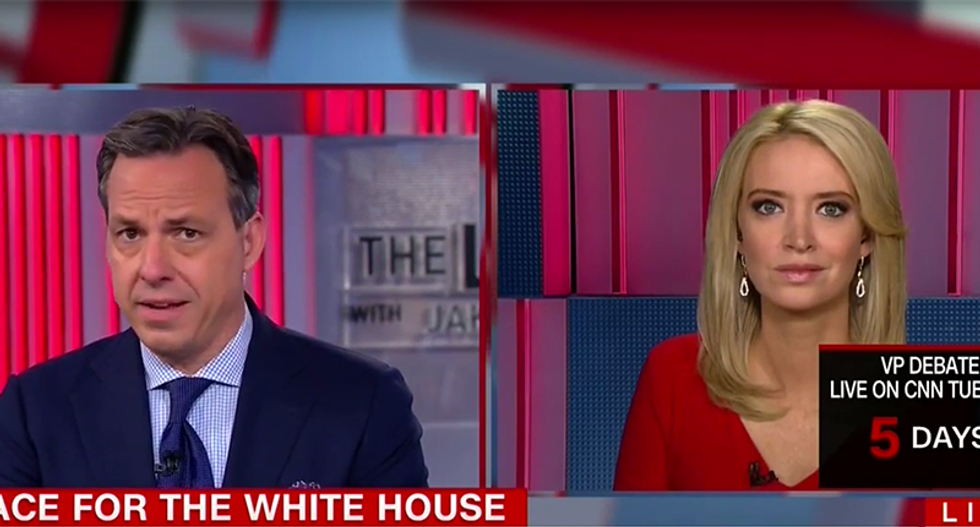 Republican presidential candidate Donald Trump is instructing his surrogates to begin attacking Democratic candidate Hillary Clinton for her husband's extra-marital affairs. In talking points emailed out from the Trump campaign this week, they urged bringing up both Gennifer Flowers and Monica Lewinsky and blaming the wife for infidelity by the husband as a disqualifier for the presidency.

Trump teased the comment in Monday's debate, saying that he could say something about the Clintons but he deserved credit for restraining himself, but after the debate finished he and his surrogates have been in full attack mode.

"Kaleigh, I am not one for bringing in people's personal lives, but it doesn't seem to me that Donald Trump -- whose extramarital exploits filled tabloid after tabloid in the '80s, '90s and more, has that much of a moral high ground when it comes to the question of his rival's husband's infidelity," Tapper said.

Trump surrogate Kaleigh McEnany replied that she agreed it was the wrong strategy for the Trump campaign to turn to, even if they are desperate. "That being said, the people around him, I certainly think, should bring it up on the airwaves," she said.

Tapper wondered how exactly Trump's staffers could manage that given their own history of extra-marital affairs. "Kaleigh, which people around him should bring it up?" Tapper wondered. "Roger Ailes, Steve Bannon, Rudy Giuliani, Newt Gingrich. He is surrounded by a philanderers club. Why would any of them have a leg to stand on?"

McEnany urged Trump campaign manager Kellyanne Conway to be the bearer of the attacks on Clinton's husband's affairs and urged a message campaign that would attack Clinton for her anger toward the women who had an affair with her husband.

Strategist Hilary Rosen interjected that Clinton has actually done work to help victims of sexual assault and sexual abuse. "She supported extra attention for victims of sexual abuse. But, you know, while the Trump campaign is spreading this story, keeping it out there, teasing it all, Hillary Clinton is doing rallies talking about college affordability for student debt."

She continued, saying that those are the issues the American people are concerned about. "They do not want to have this conversation. They do not want to rehash this. They don't want to hear about Donald Trump's affairs. They don't want to hear about Bill Clinton's affairs. They really just want a president who is focused on their own issues, and I think that sending trump female surrogates to trash Hillary Clinton instead of the male surrogates, who have no credibility here is nauseating."