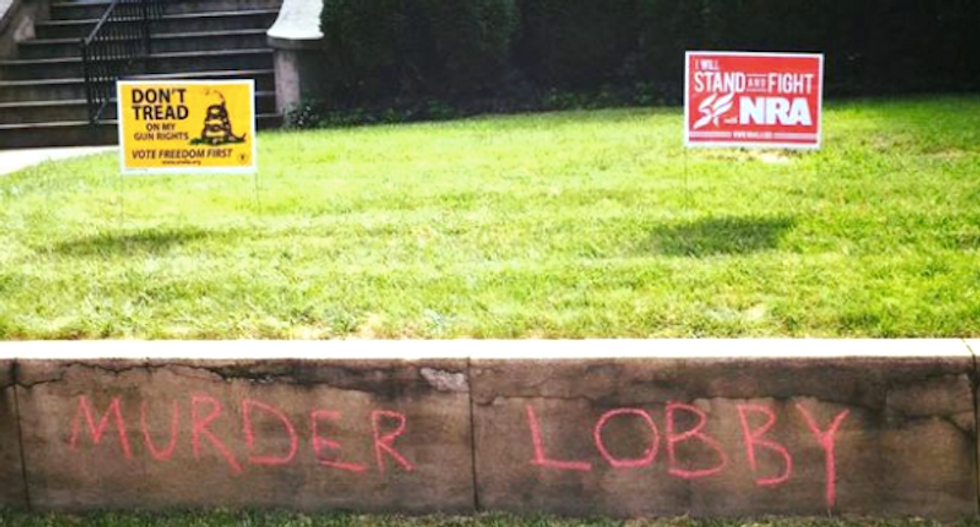 A "neo-suffragette" group called The Betsy Riot is promoting pranks, and apparently vandalism, against the National Rifle Association and other pro-gun groups.

The group, whose lobby is "F*ck Yer Guns," is being blamed for anti-gun graffiti spray-painted outside the NRA's rented office in Roanoke, Virginia -- where a disgruntled former employee gunned down two former WDBJ-TV colleagues a year ago this week.

A local lawyer, Mel Williams, rented a spare office in his building to the NRA two weeks ago as an election field office, and the gun manufacturer lobbying group held an open house Saturday, when the vandals struck, reported The Roanoke Times.

Two women painted "murder lobby" in foot-tall letters on a retaining wall outside the group's office, and The Betsy Riot posted a photo of the vandalism along with an approving message.

Police are investigating the incident, which was apparently recorded on video, and charges are possible.

“Of course, you would never do anything like stick them in parks, on changing tables, in dressing rooms, or on NRA bumper stickers because that would probably be illegal and extremely naughty, you terrible girl," the website says. "How could you even think such a thing?"

"We are infuriated by slaughter, and by the ignorant, violent, racist, sexist, fear-mongering gun culture that enables it, and by the overly polite and deferential failed attempts to quell it," a group member told the newspaper. "We are here to change that.”

They're claiming responsibility for shutting down a United Way firearms raffle in Otero County, New Mexico, for signs posted outside a gun show in Sacramento and stickers placed on beer in Connecticut, gas pumps in Kentucky and in the condom aisle of a Wal-Mart.

"We have had interest and input from people all around the country and it has taken off faster than we ever expected,” a group member told The Roanoke Times.

Andy Parker, who became an outspoken anti-gun activist after his daughter was slain last year while reporting for WDBJ, said he's not involved with The Betsy Riot but he appreciates their work.

“The intel I’ve gotten is, if you think I’m extreme, they make me look like I’m sitting idly by,” Parker added. “Which is great, I think. Without condoning it, I applaud their actions.”