Giuliani defends Trump's plan to take Iraq's oil: 'Until the war is over, anything’s legal' 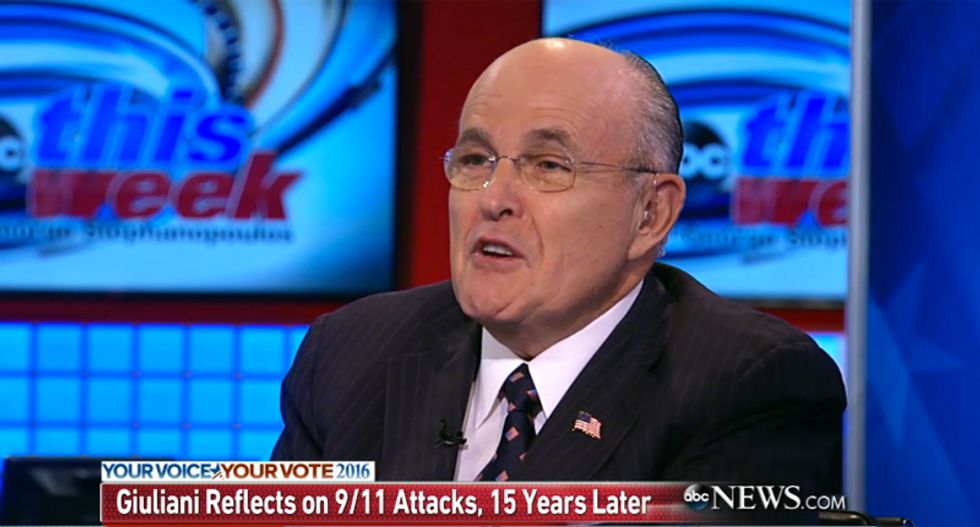 Despite stating that he doesn't like to talk about politics on 9/11, former New York City Mayor Rudy Giuliani backed up GOP presidential nominee Donald Trump's assertion that the U.S. deserves to take Iraq's oil.

Speaking with This Week host George Stephanopoulos, Giuliani initially stated that he doesn't like to talk about politics on the anniversary of the 9/11 terrorist attack but did offer up an opinion when the ABC host asked him about Trump's comments to NBC's Matt Lauer during a forum earlier this week.

"We go in, we spent $3 trillion. We lose thousands and thousands of lives, and then look, what happens is we get nothing. You know, it used to be the victor belong the spoils," Trump told Lauer. "Now, there was no victor there, believe me. There was no victory. But I always said, take the oil."

Stephanopoulos pressed the former mayor on the statement.

"One of the things that Donald Trump also said on Thursday night, again, is that we should’ve taken the oil of Iraq," Stephanopoulos asked. "Even if you could do that practically, and most experts say you couldn’t, wouldn’t that just be theft?

"Well, no. I -- he -- he said take it so that the Islamic State then would not have had it available," Giuliani replied before the host asked him, "That’s not legal, is it?"

"Of course it’s legal. It’s a war," Giuliani retorted before grinning and adding, "Until the war is over, anything’s legal."

Giuliani, who has previously defended the use of waterboarding by saying he doesn't believe it constitutes torture, defended taking the oil saying without it, ISIS wouldn't exist.

"He says we should’ve taken it," Stephanopoulos interjected.

"He didn't say we should we take it for ourselves necessarily, that we should secure it so it doesn’t get taken by terrorist forces, and then we can have some say, some control over the distribution of it," Giuliani replied. "Now if we’re going to have lost that many people in Iraq, we should have something to say about how that oil is distributed. That would’ve been the reason I would’ve done it. Maybe I wouldn’t have anticipated, but it certainly would’ve been good if this had been done. If we had secured that oil, we would not be dealing with ISIS today. They wouldn’t exist!"