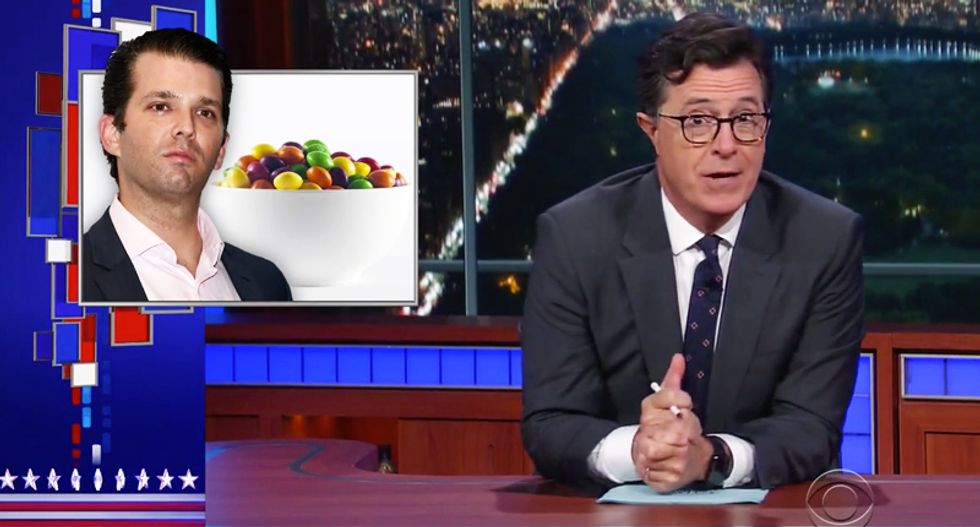 CBS Late Show host Stephen Colbert had a few things to say about the racist Skittle meme posted on Twitter by the son of GOP presidential nominee Donald Trump -- and none of them were complimentary.

The comedy host shared a picture of the tweet and proceeded to dismantle it and Donald Trump Jr. -- whom he referred to as a "guy who promises you a great deal on a 2003 Suzuki Sidekick" -- piece by piece.

Noting the odd punctuation of the meme, Colbert quipped, "First off it reads, 'If I had a bowl of skittle and I told you just three would kill you,' period."

"Okay, that's not right," he continued. "As in: 'If you think that is a complete sentence, you must have your head up your."

Continuing on, Colbert pointed out that the meme was "rip-off posted by a feminist group" using M&M's, before noting, "Of course the Trump family prefers Skittles because there are no brown ones."

The segment led up to Colbert explaining to Donald Trump Jr. "why he is wrong in language he can understand," with the late night host using popular candy brands to get his point across.

You can watch it below via CBS: