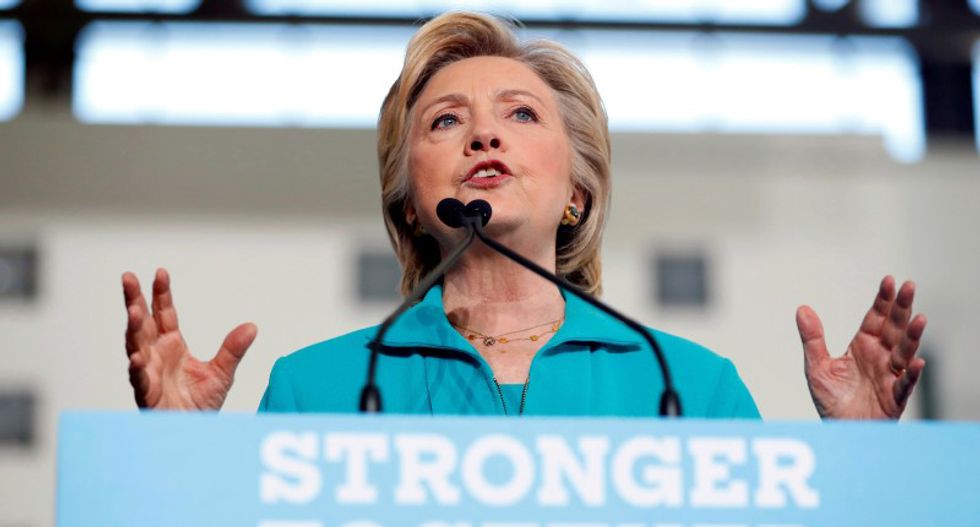 In a blog post titled "Hillary Clinton almost fainted. I’m a doctor. It’s really o.k.," Gunter explained that fainting -- or "passing out" -- is commonplace and associated with a broad array of physical syndromes.

"The medical term for fainting is syncope," wrote Gunter. "Syncope is the temporary loss of consciousness and posture and due to a temporary insufficient flow of blood (and hence oxygen) to the brain. If the feeling of faintness and light-headedness and weakness comes but there is no loss of consciousness the event is called near syncope."

"Near syncope," she explained, is an "almost faint," which is what the video taken of Clinton Sunday morning -- and played 40 times in 10 minutes by CNN's Wolf Blitzer -- appears to show.

"As a doctor I see near syncope and syncope routinely as it happens during and after procedures. With near syncope it is pretty easy to intervene, as Mrs. Clinton’s team did, and prevent the faint," said Gunter.

"The lack of blood flow to the brain that triggers fainting can be caused be a wide variety of things, from anxiety or eating a massive meal, all the way to very serious heart problems," she continued. "Mrs. Clinton is under the care of a physician and had a thorough work up when she fainted in 2012 and a documented annual exam in 2015 so we can exclude every heart condition as a cause."

"A witnessed almost-syncope or syncopal event provides a lot of information because we know what was happening at the time," the physician continued. "She was standing in the heat in a suit. If she was wearing Kevlar that would have obviously contributed to the heat. Based on what was happening at the time and her medical history Mrs. Clinton’s near-syncopal event is almost certainly the result of prolonged standing in one position and heat and possibly dehydration and not due to some secret sinister illness."

Since the post was published, Lisa Bardack, M.D. -- Clinton's personal physician -- released a statement explaining that on Friday, she diagnosed the former Secretary of State with pneumonia and urged her to rest and modify her schedule. Instead, Clinton attended a full roster of events and fundraisers over the weekend.

“While at this morning’s event, she became overheated and dehydrated. I have just examined her and she is now re-hydrated and recovering nicely,” Bardack said.

Gunter wrote, "George H.W. Bush vomited and fainted at a State dinner in 1992. He felt warm (experienced near-syncope like Clinton did). He thought he would be okay, but he fainted. It happens."

The biggest medical concerns with fainting are the following:

1) Is there some concerning underlying medical cause. In this situation for Mrs. Clinton the answer is no.

2) Was there a need for medical resuccitation? No, she recovered very quickly with supportive care.

Mrs. Clinton felt faint. It was dealt with appropriately. It looked dramatic, but it’s ok.

And so is she.

After the post was published, Gunter took to Twitter, where she criticized the media's handling of the incident.

One Twitter user with a Guy Fawkes mask avatar asked her, "Jen let me ask you a serious question: you don't think we actually believe pneumonia is driving the bus here?"

Gunter replied, "The misogynistic press is."

Elsewhere, when a commenter said, "The question is why the press and public did not get notice of pneumonia diagnosis Friday," Gunter replied, "Dunno. Maybe has something to do with how the press treats her health?"

Gunter is an OB/GYN and specialist in pain treatment. She is the author of The Preemie Primer, a guide for parents of premature babies.

According to her online bio, "I was born and raised in Winnipeg, Canada and graduated from The University of Manitoba School of Medicine in 1990 at the age of 23 (I started young). In 1995 I completed my OB/GYN training at the University of Western Ontario and moved to the United States to complete a fellowship in infectious diseases at the University of Kansas. After completing my fellowship I continued my studies in pain medicine. I am board certified in OB/GYN in both Canada and the United States. I am also board certified in pain medicine by the American Board of Pain Medicine and by the American Board of Physical Medicine and Rehabilitation. That’s why I have so many letters after my name.