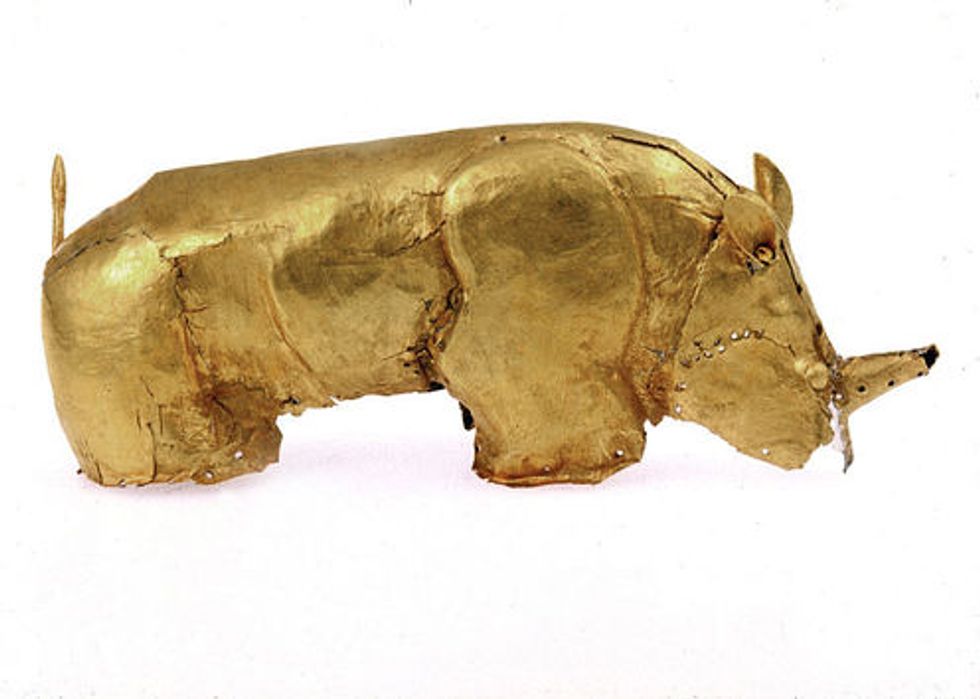 And, on the eve of its first trip out of the country for a new exhibition in the UK, it bears witness to a powerful and sophisticated kingdom that existed in Africa hundreds of years before white settlement.

The golden rhinoceros was recovered in 1934 from a royal grave at the site of Mapungubwe in northern South Africa close to the border of Zimbabwe. Its creation in the 13th century is a reflection of the wealth of the state of Mapungubwe, southern Africa’s earliest known kingdom.

Mapungubwe is thought to have emerged as the capital of the kingdom from 1220 to 1290, largely because of its control of the gold trade with the coastal Swahili settlement at Kilwa Kisiwani almost 2,000 miles away to the north-east in what is today Tanzania.

Long distance trade in the region was previously based on ivory and animal skins in return for glass beads, known from nearby earlier sites such as Bambandyanalo (also called K2), which existed from about 1030 to 1220.

However, during the 13th century, gold increasingly became the most important trade export. Eventually it replaced glass beads as a symbol of elite wealth and power. The gold rhinoceros was buried with a member of Mapungubwe’s ruling royal elite, which further enhanced its symbolic power.

The golden rhinoceros did not emerge from its royal grave until the 1930s when a team of academic and amateur archaeologists from the University of Pretoria excavated a graveyard on Mapungubwe Hill.

Mapungubwe Hill as it appears today.

Three of the 27 burial sites contained considerable quantities of gold. The gold objects included animal figurines, such as rhinoceroses, a crocodile and fragments of other unidentified animals – including two which were eventually reconstructed in 2009: an ox and a wild cat.

These figures were found alongside gold sceptres, a bowl considered by some to be a crown, bracelets, bangles, beads, nails, and discs. Significant information was lost due to the style of excavation (some of it was undertaken by inexperienced amateurs). Nevertheless, a rich picture of life at Mapungubwe has since been developed based on these and more recent excavations at the site and analyses of the excavated material.

Gold vessel – thought to possibly be a crown.

The picture that has been revealed is of a socially stratified site with the elite living on a restricted access hilltop while the majority of the population lived beneath. The economy of Mapungubwe was based on cattle herding, agriculture, hunting and gathering, as well as long-distance international trade, as indicated by finds of Chinese porcelain.

The power of the golden rhinoceros, and other finds from Mapungubwe, were again recognised in the 20th century. The ruling elite of that era, the white South African government, acknowledged their potency by marginalising them within official South African narratives.

The gold rhinoceros and other sculptures from Mapungubwe, and sculptures from related earlier sites such as Schroda and Lydenburg, presented a challenge to the colonial and apartheid ideologies that supposedly justified European settlement and white rule.

This included the historical construction that South Africa was not populated when Europeans began to settle there in the 16th century and that black South Africans only arrived at the same time and only occupied a relatively small area of the country, leaving the remainder ripe for white settlement and ownership.

By contrast, pre-colonial sculptures demonstrated that black South Africans had occupied the region for a least 1,000 years before the arrival of Europeans. Although archaeologists knew about the objects – they were reported in the press and some were exhibited (albeit with restricted access) – their histories and the obvious implications of their existence were not incorporated into official histories.

The power of the golden rhinoceros was again recognised by the first post-apartheid administration in South Africa, the African National Congress (ANC). The ANC appropriated the golden rhinoceros for the new South Africa and held it up as evidence of a southern African Renaissance before the arrival of Europeans. In 1999 the gold rhinoceros was designated a National Treasure. In 2002 the ANC created the Order of Mapungubwe, the highest honour in South Africa, of which there are four classes: platinum, gold, silver and bronze. Nelson Mandela was the first to receive the highest of these awards, platinum. At the centre of the award is a representation of the gold rhinoceros.

Today, as the gold rhinoceros is about to leave South Africa for the first time to be displayed in the British Museum’s South Africa: the art of a nation exhibition, its powers to communicate are charged and enhanced again. In the exhibition it will sit on a world stage where it will again speak to new audiences about the importance of Mapungubwe, the pre-colonial past, the crimes of colonialism and apartheid – and the ambitions of a contemporary South Africa.