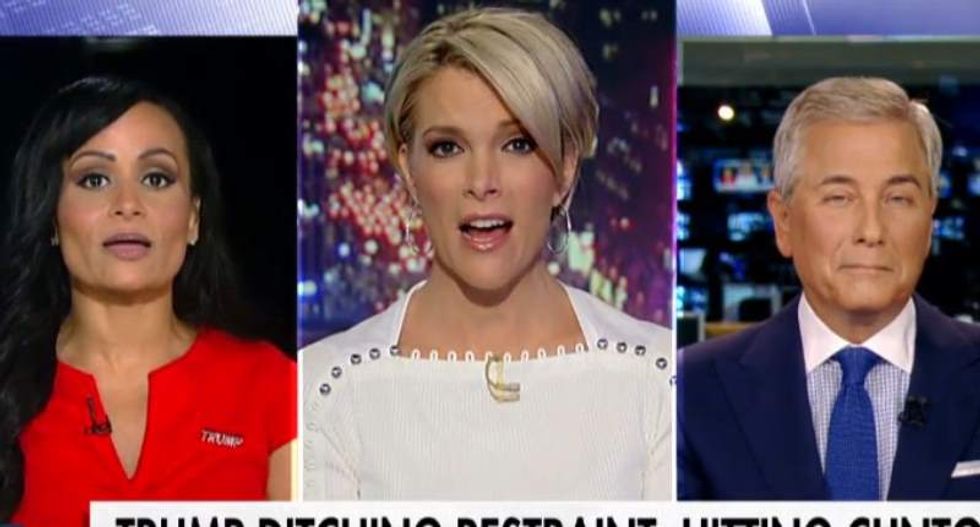 (L-R) Katrina Pierson, Megyn Kelly and Robert Zimmerman engage in a discussion on 'The Kelly File' on Sept. 15, 2016. (Fox News)

"Why, for the love of God, won't he just say that Barack Obama was born in the United States?" Kelly asked the Republican presidential nominee's spokesperson.

"Here we are, 15 months later, and still there are many in the media that expect Donald Trump to be some robotic politician and that's just not who he is," Pierson said. "He was asked to respond to Colin Powell's comments, and he did. He's not gonna let the media determine what he talks about and when, and that's exactly what you're seeing here. Mr. Trump is gonna be Mr. Trump. He will respond when he feels like it."

Pierson complained that Hillary Clinton's campaign and the media -- "which is CNN" were rehashing the issue, calling it a "diversionary tactic." But Kelly did not abandon the question, pointing out that both Rudy Giuliani and Kellyanne Conway said on national television that Trump believed Obama was born in the US.

Earlier in the day, Trump also dodged the question, saying, "I'll answer that question at the right time. I just don’t want to answer it yet."

"So why wouldn't he say it when asked tonight?" Kelly asked Pierson.

"Simply because he does not talk about that anymore," said Pierson, parroting the campaign line. "Barack Obama is not on the ballot. It is completely irrelevant to the election cycle."

"Katrina, that's not gonna fly," Kelly replied, shaking her head. "Does he believe it or not? You have a lot of people -- particularly African-Americans -- who feel that that position was a racist position meant to delegitimize the president. I'm taking no position on this; I'm relaying to you what they've said. His own campaign manager came out and said he has shifted his belief on this and now when asked directly, he refuses to confirm that. Why?"

"And you also have a poll in South Carolina that shows that Mr. Trump is pushing on 30 percent African-American support, Pierson replied before Kelly told her, accurately, "That's a dodge."

"Hillary Clinton has insulted half of the country," Pierson said, brushing it off. "Mr. Trump has said he's not gonna talk about it. I have given you the answer."

"That's a dodge," Kelly repeated, before repeating Trump's statement from earlier, adding, "There's like a tease baked into it."

"The media's not gonna force Mr. Trump to say anything he's not ready to say," Pierson shot back, cutting off fellow panelist Robert Zimmerman.

"The media didn't force him to come out and take a position being a birther, but he did!" Kelly shouted in response.