Russian Greens slam Stein for cozying up to Putin: Your silence on his crimes ‘silences our struggle’ 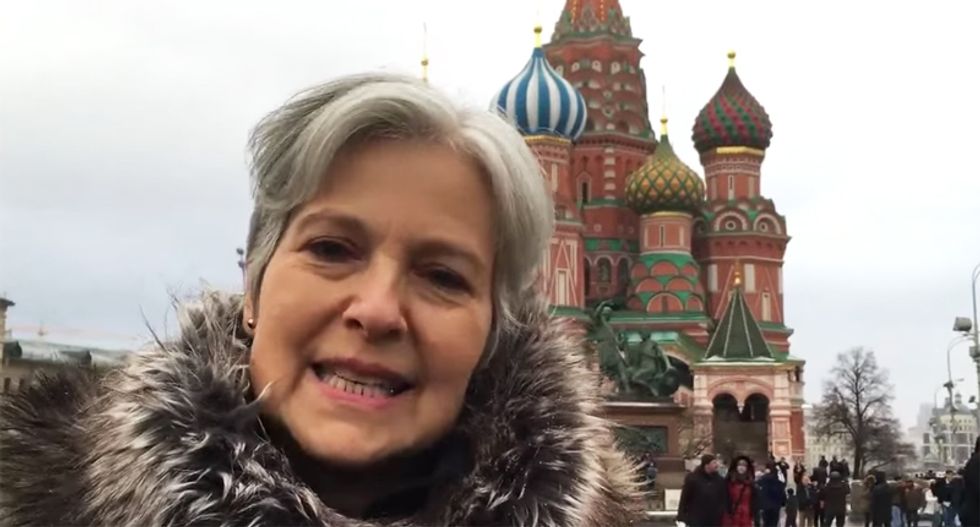 In a video  posted to YouTube (see below) last year, Stein thanked her supporters for making her trip to Russia possible as part of a conference sponsored by Russia Today, where she sat at a table with the Russian strongman.

Speaking about "basic human values, human rights, around the need for international law," Stein criticized a "U.S. policy of domination" without once mentioning life under Putin.

This did not sit well with Yevgenia Chirikova and Nadezhda Kutepova who took to Facebook to express their displeasure with Stein for ignoring their plight, reports Radio Free Europe.

"After your visit to Moscow and your meeting with Vladimir Putin you said that 'the world deserve[s] a new commitment to collaborative dialogue between our governments to avert disastrous wars for geopolitical domination, destruction of the climate, and cascading injustices that promote violence and terrorism.'" they wrote. "We agree with you. But how can this new "collaborative dialogue" be possible when Mr. Putin has deliberately built a system based on corruption, injustice, falsification of elections, and violation of human rights and international law?"

"How is it possible to have a discussion with Mr. Putin and not mention, not even once, the fate of Russian political prisoners, or the attacks against Russian journalists, artists, and environmentalists?" the letter continued. "Is it fair to speak with him about 'geopolitics' and not mention new Russian laws against freedom of speech, restrictions on NGOs and activists, or the shameful law that forbids 'homosexual propaganda?'"

"By silencing Putin’s crimes you are silencing our struggle. By shaking his hand and failing to criticize his regime you are becoming his accomplice. By forgetting what international solidarity means you are insulting the Russian environmental movement," they concluded, before asking for Stein to address their situation, saying they hoped, "our questions will not go unanswered," by the Green Party presidential nominee.

According to the Green Party, the plea has been forwarded to Stein, with spokesperson Scott McLarty saying, "I think the letter exaggerates Dr. Stein's alleged deference to President Putin.”

Watch the Stein video -- posted on YouTube last December -- below: