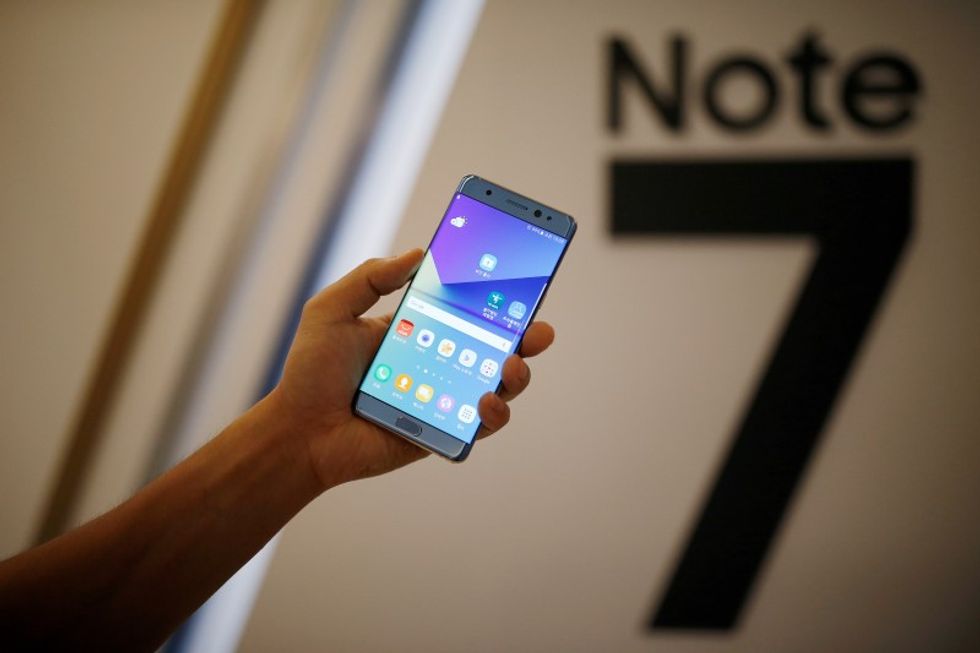 A model poses for photographs with a Galaxy Note 7 new smartphone during its launching ceremony in Seoul, South Korea, August 11, 2016. REUTERS/Kim Hong-Ji/File Photo

A U.S. government safety agency on Friday urged all consumers to stop using Samsung Galaxy Note 7 phones, which are prone to catch fire, and top airlines globally banned their use during flights.

Following reports that the phones' batteries have combusted during charging and normal use, the U.S. Consumer Product Safety Commission said it was working on an official recall of the devices and that users should turn them off in the meantime.

Samsung Electronics Co Ltd <005930.KS> said it was working with the agency and asked customers to immediately turn in their Note 7 phones. It voluntarily issued a recall last week for 10 markets, including South Korea and the United States, and it said it was expediting shipments of replacement phones to customers in the United States.

The U.S. government action heralds more fallout for the South Korean manufacturer, which may take a financial hit from the recall and lose customers who are concerned about the quality of its flagship phones.

Some analysts say the recall could cost Samsung nearly $5 billion in revenue, after accounting for expenses from the recall process.

For Samsung, which prides itself on manufacturing prowess, the scale of the recall is expected to be unprecedented. Some 2.5 million of the premium devices have been sold worldwide, the company has said. Its shares closed down 3.9 percent on Friday.

Samsung said users in the United States can exchange their phones for one of several models and receive a $25 gift card.

In a separate statement on Saturday, Samsung asked consumers in South Korea to discontinue the use of their Galaxy Note 7 phones and visit one of the company's service centers for the recall process.

"The cost of the recall is going to be astronomical," said product liability expert and chief executive officer of Real-World Forensic Engineering, Jahan Rasty.

"They have to compensate people, fix the problem and give them a revised version of the product that doesn't have the same manufacturing or design defect.

"The longer this story lingers, the more it will etch itself in people's minds," he said.

One pain point is that the devices are now off limits in a typically high-use setting: aboard planes.

Aviation authorities and airlines from North America to Europe and Asia have issued bans or guidance on the phones. On Thursday, the U.S. Federal Aviation Administration (FAA) said travelers should not use or charge them while in the air, or stow them in checked luggage.

The FAA's action prompted the world's three largest airlines by passenger traffic - American , Delta and United - to start telling passengers at the gate and on board aircraft to keep the phones switched off until they deplane.

While experts say the bans may be tough for airlines to enforce, they nonetheless may deter would-be customers of the Note 7 in addition to annoying existing customers.

That's because airlines have increasingly made movies and TV shows available free for streaming on smart devices in flight, to avoid the cost of installing new screens on seat-backs. For now, Note 7 customers are cut off from this entertainment.

They are the latest in ongoing efforts in the airline industry to manage the use of lithium-ion batteries, which are known to combust and are used in many devices, from phones and laptops to toys.

A January report from the FAA said at least 171 incidents of smoke, fire, extreme heat or explosion involving batteries have occurred since 1991.

In some instances, they have caused emergency landings, as when a camera short-circuited and started a small fire in the overhead bin of an American Airlines flight in September 2013. Injuries were rare, the report said.