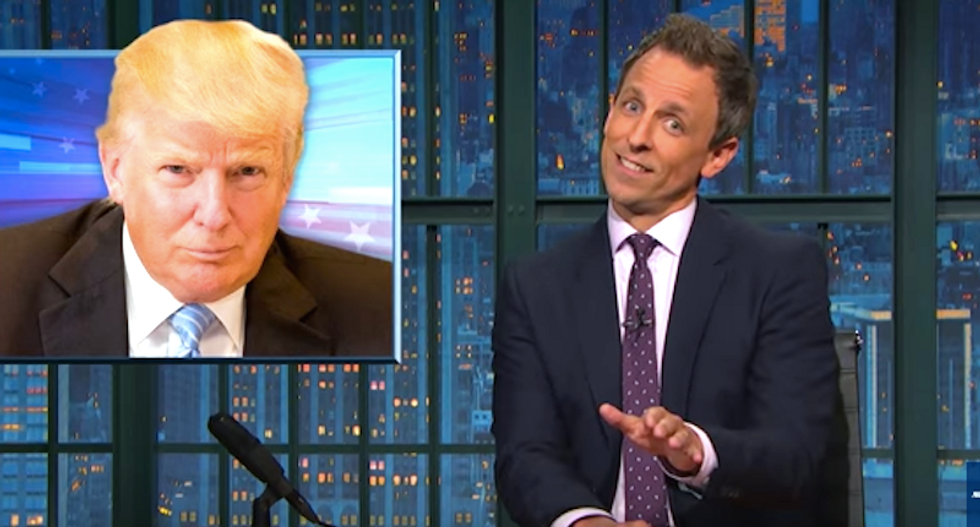 Mounting evidence suggests Donald Trump illegally used money donated by others to his foundation to pay his personal legal bills -- and Seth Meyers laid out the possible criminal case against him.

The Republican presidential candidate hasn't contributed his own money to the Trump Foundation since 2008, although he took $120,000 from the charitable foundation the year before to settle fines he owed for violating Palm Beach rules.

"He put up a flagpole twice the legal height and refused to take it down," Meyers said. "Sounds like he's compensating for something. When Freud heard that, he tried to roll over in his grave -- but he couldn't, because he had a boner."

Trump also used the charity's money to settle a dispute over a $1 million prize he refused to pay out in hole-in-one contest held at a golf course he owned.

"He rigged the contest so it couldn't be won," Meyers said. "He's like a carny working the ring toss at a state fair. There's a reason the Donald Trump Foundation is abbreviated 'DTF,' because it is down to F you over."

The real estate developer and former reality TV star also used charitable donations to buy a 6-foot-tall portrait of himself at auction -- although his wife was the only bidder.

Trump claims he's made tens of millions of dollars in charitable donations from his personal money, but there's no proof until he releases his tax returns.

"I personally don't buy that a guy who talks like this," Meyers said, playing a brief montage of Trump boasting about his brain, his words and his wealth, "that a guy who brags about himself like that would be charitable on the down-low."

"'I'd like to send a Christmas goose to the orphanage,'" Meyers added, doing a Trump impersonation. "What would you like the note to say, Mr. Trump? 'From a friend.'"

Trump using charitable donations to settle lawsuits and buy gifts for himself should be one of the bigger scandals in the 2016 campaign, Meyers said, but he thinks it's unlikely to hurt the GOP nominee.

"The reason it probably won't stick is the same reason none of Trump's scandals ever seem to stick: He has no shame," Meyers said. "In fact, when he's confronted, he just doubles down. He's like a dog who pees in the house, and when you rub his nose in it, he says, 'Mmmm, I love the smell of my own urine.'"