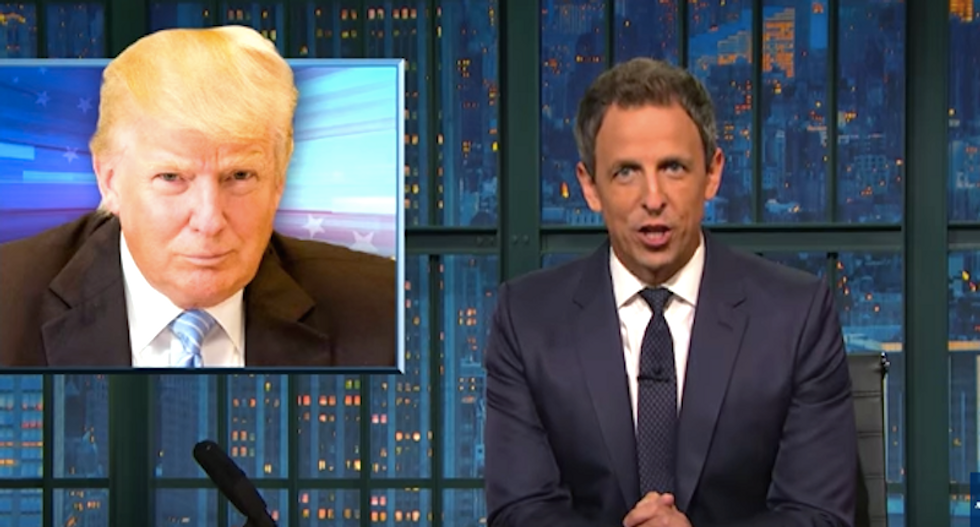 Donald Trump has kept the focus all week on his blunder during the first presidential debate, Seth Meyers said -- all while insisting he performed better than Hillary Clinton.

"Rather than move on from the debate, Trump and his supporters have insisted on continuing to argue about some of his worst moments, like when he cryptically hinted that he was going to attack Hillary for her husband's affairs, but decided not to because he's such a great guy," Meyers said. "Trump's campaign has been demanding that we give him credit for that -- all while bringing up the exact thing he said he would not bring up."

Trump's son, Eric, praised his dad's "courage" for not bringing up Clinton's marriage during the debate, although the Republican presidential nominee and his surrogates have spent days talking about it on TV and during campaign events.

"Yes, such courage, he didn't attack Hillary for her husband's affairs -- what a hero. Someone should give him a trophy," Meyers said, as a photo of Trump and his third wife, Melania, appeared onscreen. "Oh, that's right -- he already has one."

Meyers took a moment to appreciate Clinton burning Trump for his love of beauty pageants, reminding voters that he really liked "hanging around" those contests.

"There's really nothing creepier than someone who hangs around beauty pageants," Meyers said.

Clinton's reminded voters that Trump had repeatedly and publicly bullied the Miss Universe winner while he owned that contest, and Meyers said that was a low point for the GOP candidate during the debate.

His campaign wanted to move on from the issue, but Trump instead spent days continuing to attack the former beauty queen and her weight -- all while painting himself as the victim of unfair treatment.

"Can you imagine Donald Trump, of all people, ending up in a position like this?" Meyers said. "Why do bad things happen to good people?"