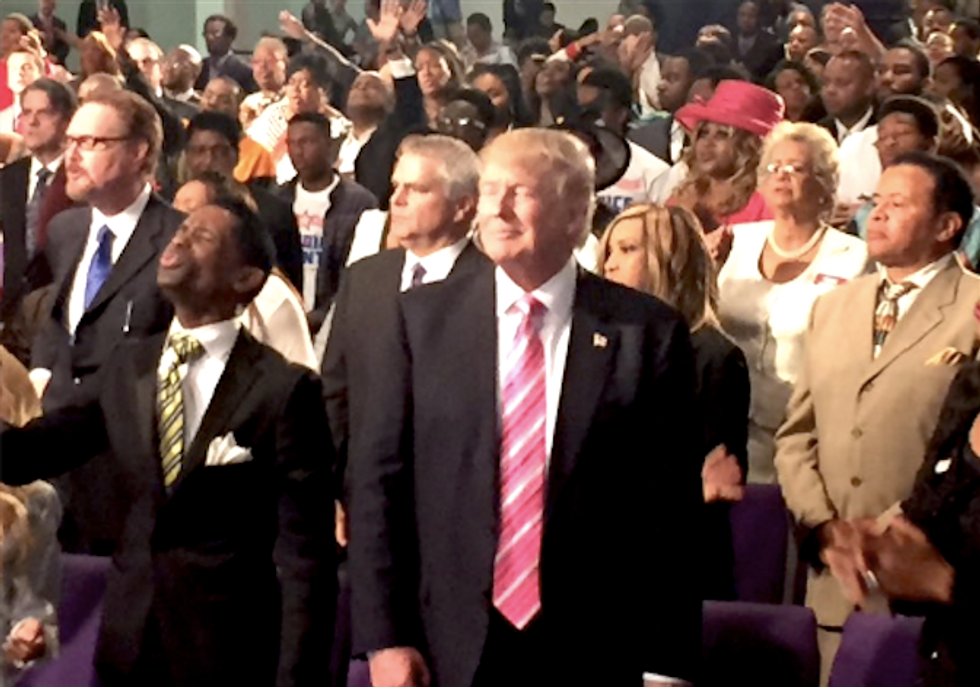 Republican presidential nominee Donald Trump's outreach to nonwhite voters is getting universally panned by all but his most ardent supporters.

"It's going abysmally bad for Trump right now," said Javier Palomarez -- chief executive of the US Hispanic Chamber of Commerce -- to CNN.

Weeks ago, the Trump campaign announced that it would be undertaking a concerted effort to woo nonwhite voters as the candidate's poll numbers sank lower and lower with black and Latino voters. Since then, Trump has visited Mexico and made a stop in one black Detroit church. He has delivered pleas to the black community while standing before all-white audiences.

Campaign spokesman Jason Miller told CNN, "Mr. Trump is committed to being a president for all Americans, and unlike Hillary Clinton, that includes campaigning hard for everyone's vote. Mr. Trump knows that by working together, we can improve economic opportunities for everyone, make our communities safe and break up Washington's rigged system that has left too many behind."

However, it seems that each clumsy, condescending effort Trump makes to draw in black and Latino voters only drives them further away.

"He talks about us, and he doesn't talk to us," said Bettina Inclán, a former director of Hispanic outreach for the Republican National Committee. "It doesn't matter whether you are white, black, brown, yellow or red, (voters) want authenticity -- that you're not just going to them for their vote but you care about their issues."

"Sometimes these outreach efforts seem like they're geared to appease Republicans and white voters who are leaving him," Inclán said.

This is an opinion shared by many Trump critics, including New York Times columnist Charles Blow, who said in August that the former reality TV star's extended hand felt more like a boot on the neck.

He called Trump's ham-handed attempts to discuss black Americans “the most insidious kind of bigotry.”

Trump's surrogates of color aren't helping his effort, either. Latinos for Trump founder Marco Gutierrez stunned an MSNBC panel and spawned an instant Internet meme this week when he warned that a vote for anyone but Trump would mean "taco trucks on every corner" in the country.

Trump-backing black clergyman Pastor Mark Burns stormed out of an interview on Saturday after he was confronted with multiple fabrications and distortions he made in his biography.

Brown claimed he graduated from college with a Bachelor of Science degree. He did not. He also falsely claimed that he served six years in the Army Reserve.

CNN said, "Throughout his presidential campaign, Trump has turned down opportunities to speak to diverse audiences. He declined an invitation to the National Association for the Advancement of Colored People convention, as well as four different invitations from the National Urban League to participate in questionnaires, briefings or conventions, according to the group."

The main -- and perhaps most empirically valid -- critique of Trump's appeal to voters of color has come so late in the campaign season.

"Minority outreach, stakeholder engagement and coalition-building -- those are long-term projects. Those aren't just things that happen when you say you're going to go and engage the African-American community," said Republican campaign strategist Jeff Polesovsky to CNN. "You have to spend a lot of time listening, understanding their needs and then reacting with a sense of urgency."

The Hispanic Chamber of Commerce's Palomarez said that Trump's attempt to pivot away from stoking white voters' racial resentments is too little and it's coming far too late.

"Honestly, it just seems like there's no going back. The offense is so deep, so outlandish," Palomarez said. "I really don't know when or how or if the Republican community will ever recover."