Trump surrogate: Black voters think there are 'legitimate questions about the birth certificate' 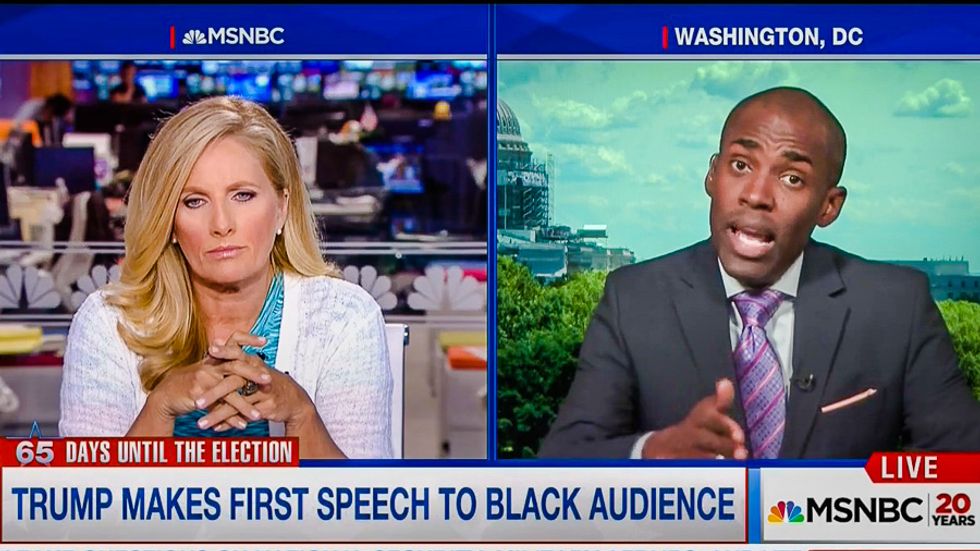 A day after Trump visited a black church in Detroit, former New York Mayor Rudy Giuliani on Sunday had insisted to CNN that no apology was necessary for falsely suggesting that Obama was not an U.S. citizen.

Giuliani said that it was Democrats who should apologize for painting Trump as a racist after he pushed the birther agenda into the mainstream.

"I think idea that members of my community are somehow sitting around the kitchen table and wondering, 'Donald Trump, should he apologize for raising legitimate questions about the birth certificate of President Obama?' That's not the main issue today," Dennard said. "That's not what's on the minds of people in my community."

"You say that it was a legitimate issue," MSNBC host Alex Witt replied. "It's not a legitimate issue. Let's be real. Come on. And this was something that was started by Donald Trump back in the day. It could be something, if he were to apologize, people would see, 'Alright, I'm capable of apology. I have a change of heart. I realize that it was wrong to put so much into this birther movement.'"

"Don't you think that would go a long way?" the MSNBC anchor asked.

"I believe that if truth be told, it was Hillary Clinton and the Clinton campaign in '08 who started this whisper campaign about President Obama," Dennard insisted. "Would it help if Hillary Clinton apologized for calling Donald Trump a racist, a bigot and all these things that are unsubstantiated? I don't think that's going to move the needle."

The fact checking website Politifact has examined Trump's claim that Clinton started the birther movement and determined it to be "false."

"Most of the talk started after Clinton suspended her presidential campaign. And the only thing she officially has ever done is deny any accusation of starting a whisper campaign," Politifact noted in 2015. "We rate this claim False."