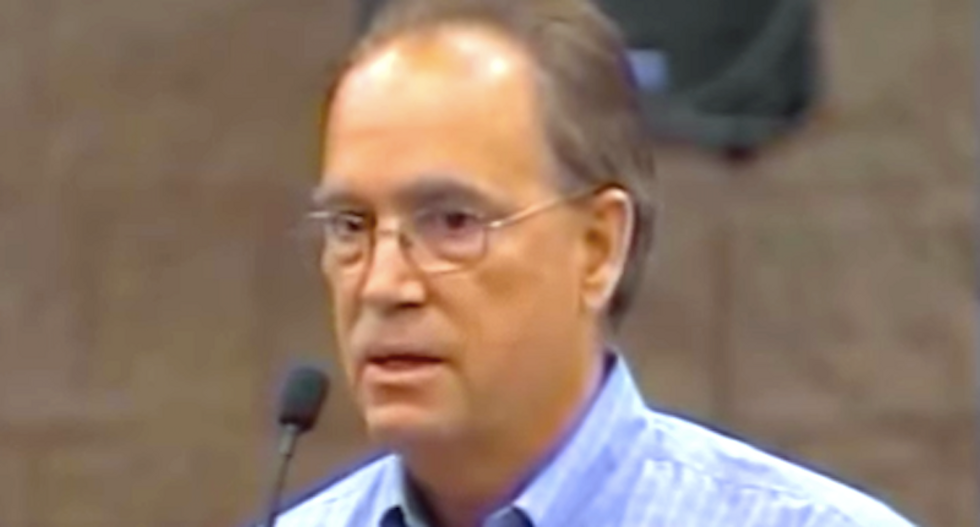 A former Scientologist confronted a City Council candidate at a California meeting, where she revealed they both had been sent as spies by the group to harass one of the church's critics.

Paulien Lombard, who has since left the church, addressed a City Council meeting in Garden Grove, describing how she and candidate Clay Bock had been sent by Scientology's spy wing, the Office of Special Affairs, to intimidate a man who'd been protesting outside the group's "Int Base," reported Tony Ortega.

Ortega, who served as Raw Story's executive editor from 2013 to 2015, reported that Lombard had described the mission -- which targeted Francois Choquette -- to reporters and city officials before, but she had never revealed her accomplice.

Lombard said she and Bock, who has not made a secret of his Scientologist views, went one Saturday morning in 2008 to Choquette's home, where they handed out fliers warning his neighbors about him and told police he was a terrorist after officers responded to a complaint.

"I was truly thinking that day that I was doing a good thing, because I believed everything my church told me," Lombard said. "Little did I know I was being lied to."

She said Choquette had gone to great lengths to keep his address and other aspects of his personal life private, but Scientologist spies under the direction of Clif Miller had spent months tracking the critic, who went by the name AnonOrange.

Lombard, who has become an outspoken critic of the church herself, said she and Bock had been sent as goons to intimidate Choquette and force him to give up his protest activities.

Bock was actually in attendance when Lombard outed him as a Scientology spy, and the stunned City Council candidate nervously addressed the meeting afterward.

"I had no idea Paulien would be here or that this would be an issue," Bock said.

Bock, who is deeply tied to Scientology’s anti-psychiatry front group, the Citizens Commission on Human Rights, went on a lengthy rant against psychiatry and defended his views.

"We have our haters, and you could say it's like the KKK and African-Americans," Bock said.