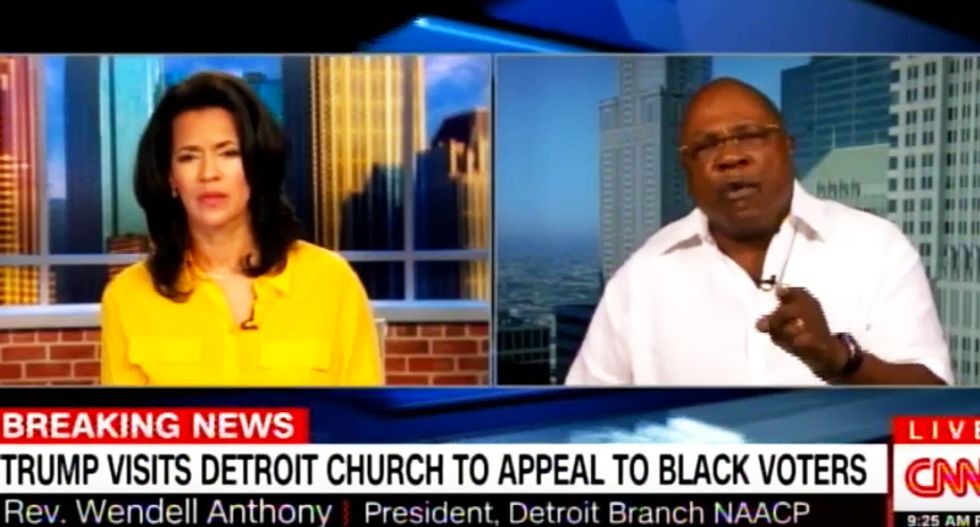 GOP presidential nominee Donald Trump made a pilgrimage to a somewhat welcoming Detroit-area church Saturday morning to deliver some highly scripted remarks and take a few questions -- only to have a local reverend and head of the Detroit NAACP brush the whole production off as a big "scam."

After mocking Trump's grasp of the Bible, Anthony blasted Trump's appearance in Detroit before the type of black audiences he has previously avoided on the campaign trail.

"This is nothing more than a ruse. This is a scam," Anthony explained. "Mr. Trump is seventy years old, I believe. That election now is less than seventy days from now. It's gonna take a whole lot of conjecture and whole lot of programming to undo what has been done."

"Before you talk about the can-do, let's talk about the undo," he continued. "Let's undo what Mr. Trump has done. Part of what he said is that we need to unite the country. Well his policies, or lack thereof, his commentary, his rhetoric, is doing no more than dividing this nation. When you talk about 'I don't want black people counting my money,' or rather have 'short folk with yarmulkes counting my money' -- that's divisive!"

Anthony was only getting warmed up, calling Trump's campaign nothing more than an "old southern strategy wrapped up in a new suit in 2016," making an  appeal to the racism of southern Dixiecrats as designed by the late political strategist Lee Atwater.

Speaking of Trump,  Anthony warned, "If we don't know him by now, we will never know him. And what we know is that we don't like what we see!"

The Rev. Anthony had plenty more to say after that.