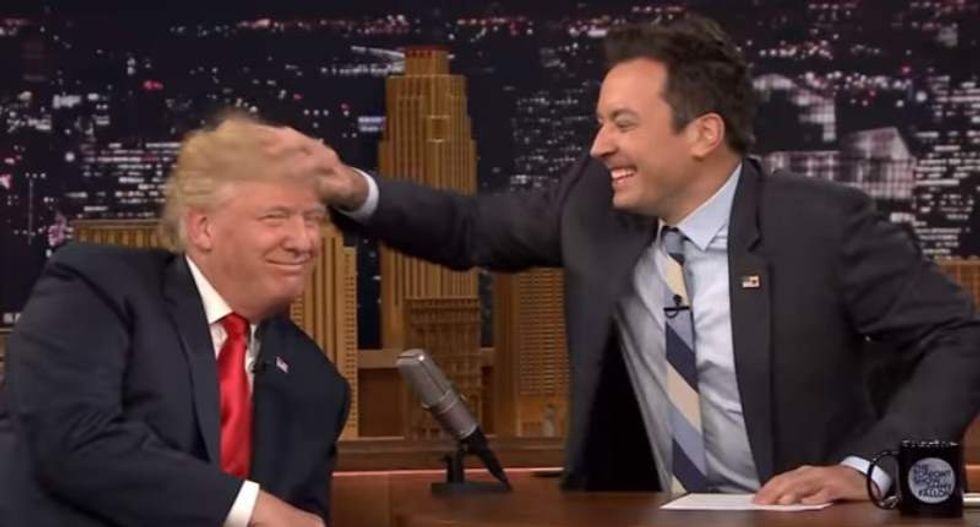 "Frankly I thought Matt Lauer did a a fantastic job," said Trump, who was widely believed to get a softer line of questioning during the event. "They're trying to game the system by saying Trump won the debate because Matt Lauer wasn't as tough on Trump as he was on Hillary Clinton. And that wasn't it. I mean, he was tough on me and he was tough on her."

Instead of correcting him for misrepresenting the event as a debate, however, Fallon played along.

"We love Matt Lauer. We're a fan of Matt Lauer here too," the host said instead.

At one point, Fallon gave Donald Trump a presidential "job interview" as part of a wide-ranging interview on Thursday night, during which he discovered Trump's back-up plan should he lose to Democrat Hillary Clinton in November.

"What will you do if you don't get this position?" Fallon asked.

"You know, I think I want to, more than anything ever, I want to take over The Tonight Show," Trump answered.

Earlier in the interview, the GOP presidential nominee also downplayed his gushing praise toward Russian President Vladimir Putin, who he described as being "far more" of a leader than US President Barack Obama.

"I don't know him. and I know nothing about him, really," Trump claimed. "I just think if we got along with Russia, that's not a bad thing and getting along with other countries. The Democrats try to say i like him somehow. I don't like him. I don't dislike him. I don't have any feelings one way or the other."

The first half of the interview can be seen here.

And part two can be seen below.