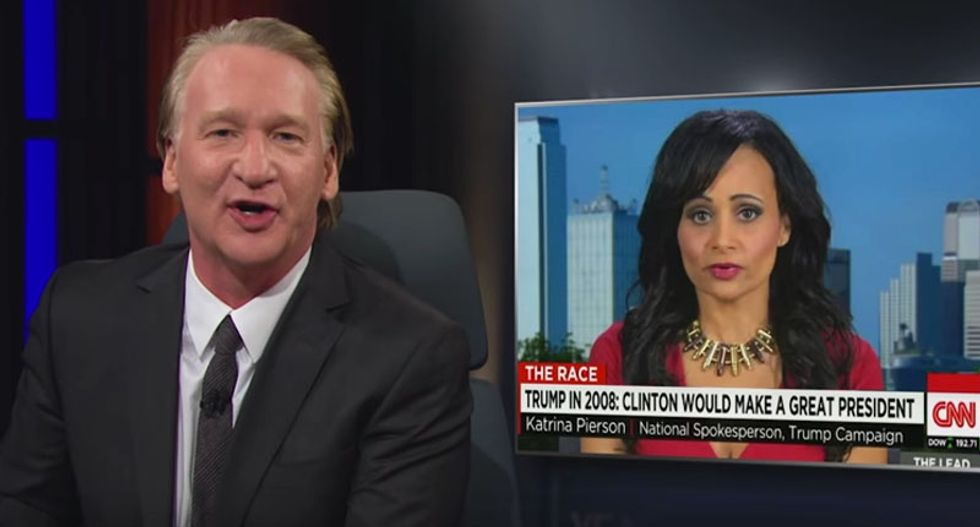 In a segment that is long overdue, HBO Real Time host Bill Maher took a long look at the army of advocates GOP presidential nominee Donald Trump deploys to cable TV every night -- using them as a preview of who you can expect to be running the country if he becomes president.

Maher began by listing off some of the more prominent talking heads who are cable regulars sent out each day to defend the worst that Trump has to offer.

"Steve Cortes and Katrina Pierson and Chris Christie and Omarosa are trundling down the corridors of power, bumping into the walls," he explained.  "We're thinking of giving these people the reins of power? I wouldn't put them on a bus without asking the driver to make sure they didn't miss their stop."

Maher called out Trump spokesperson Kayleigh McEnanny -- a CNN regular -- as "Ann Coulter without the empathy," and slammed Katrina Pierson as "someone's crazy ex-girlfriend," before sharing her racist comments about President Obama and the time she wondered why the U.S. "has nukes if we're not going to use them."

With his 14 bankruptcies, real estate "scam artist" Marco Gutierrez  (of "taco truck on every corner" fame) isn't just "the head of Latinos for Trump -- he's a Latino Trump!" Maher quipped.

But Maher saved most of his ire for Trump attorney Michael Cohen who became famous for his bizarre "Says who?" exchange with CNN's Brianna Keilar.

According to Maher, he was sued in 2013 by the Trump attorney for $5 million over an offer the HBO host made asking for proof that Trump  mother "in fact, didn't f*ck an ape."

As Maher pointed out, the suit actually made it to court where Trump's attorney produced the candidate's birth certificate.

"Yes, I made Donald Trump produce his birth certificate" Maher exclaimed mimicking Trump's voice. "And I'm very proud of it!"