CNN conservative: Trump's 'p*ssy' comments are the 'death knell of his campaign - this race is over' 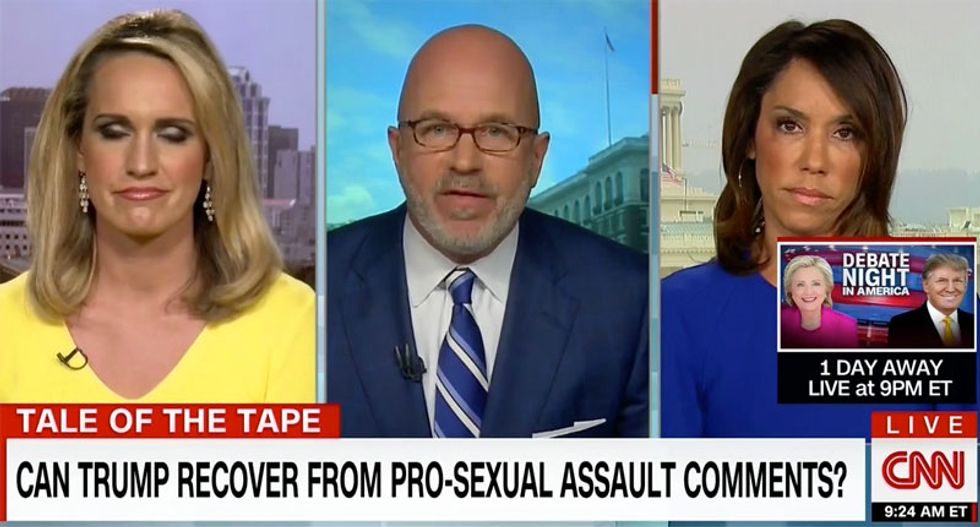 The hits just keep on coming for GOP [residential nominee Donald Trump, with a popular conservative writer calling the presidential race "over" following the release of a video of Trump gloating about sexually assaulting women.

Appearing on CNN with host Michael Smerconish, Trump advocate Scottie Nell Hughes -- who appears to be the only Trump supporter willing to go on the record and attempt to defend the indefensible -- said she strongly disapproved of Trump's comments, but said she can't stand the idea of former Secretary of State Hillary Clinton as president.

Turning to Crystal Wright from ConservativeBlackChick.com, the host asked, "What I'm hearing here is what she's saying, and I think what a lot of trump supporters are saying, is it doesn't matter what he does. It doesn't matter what he says. The thought of Hillary being president is so abhorrent 'I am hitching myself to his wagon regardless.' Is that it?"

"I don't think it's that black and white," Wright replied. "I think it does matter what Donald Trump said and, as I tweeted yesterday, I think this is the death knell in his campaign."

Admitting that she also has no desire to see Hillary Clinton as president, she went on to to say the latest revelation about Trump should be the end of the road for him..

"The problem with Donald Trump, the reason why this comment is a punctuation mark on the narrative that he hates women is because isolated incident after isolated incident, we find Donald Trump saying awful things about women," she explained. "It comes off the heels where he wanted to get down in the mud at the debate with Hillary Clinton.

"He cannot pivot away from this nonsense and talk about policies," she continued. "Unfortunately this is coming in the ninth inning. I'm not happy about it. I will not vote for her, but in many ways it looks to me like the race is over."

"I don't know," she added resignedly.