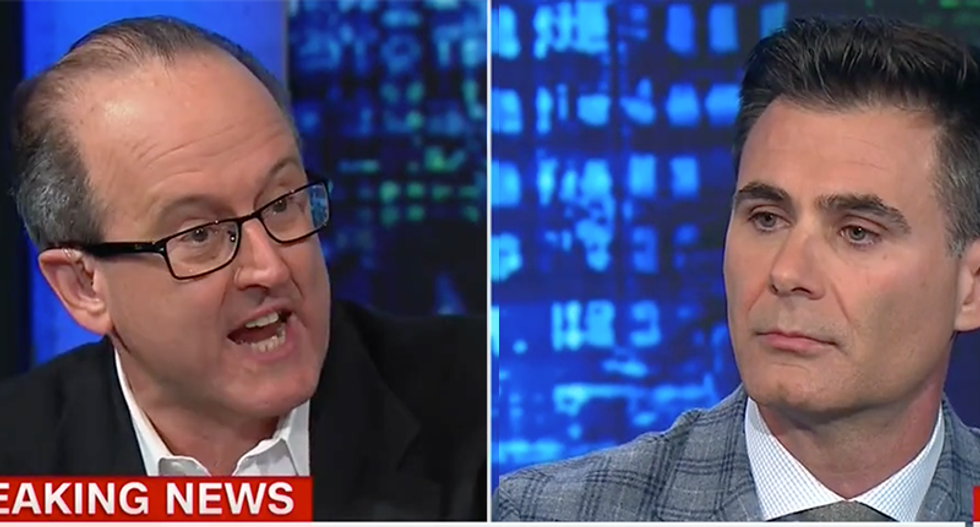 Donald Trump supporter and CNN commentator Andre Bauer had a bad night as a pundit, after the news broke about 2005 statements Trump made about groping and grabbing women. Republicans have been lining up to denounce Trump's comments and most of the CNN pundits from the right have also said that the comments are deplorable, but Bauer decided it was just "guy talk." Democratic strategist Jonathan Tasini lost it and went off on Bauer.

"It creates an uncomfortable situation," Bauer said, trying to dimish the tape. "And it's not a healthy thing to happen 34 days out before an election, and two days away from a debate. I think he will move forward from this. It's definitely an obstacle. And all of us have said things that we wish we could take back. This was many years ago. I'm not excusing it in any way. And it was guy talk."

Bauer then went on to blame the media for recording the sound rather than Trump for being a predator. "And quite frankly, it should have never -- a TV station should have never been recording. And furthermore, shouldn't have released it. But where we are is now that it has been released, he has apologized. Hopefully, he'll be able to move forward and get into debate mode."

That's when Tasini lost his mind. "Guy talk is -- assault against women is not guy talk," he began. "Saying 'I'm going to grab your p*ssy' and assaulting women is not guy talk. That is a crime. And for you to sort of say, it's an obstacle, and not sit here and say that Donald Trump must step down and not be president because he's a deranged individual is astonishing to me."

Liberal commentator Karine Jean-Pierre was right there with him in the smackdown of Bauer's statements. After Bauer tried to blame former President Bill Clinton and pivot to statements he may or may not have made or done Jean-Pierre was quick to conclude that his name isn't on the ballot.

"What we saw today is that Donald Trump is indeed a sexist, misogynistic pig, period!" She exclaimed. "Then you look at the definition of 'deplorable,' you're going to see a picture of Donald Trump. It is unbelievable -- it is unbelievable what we have to listen to and hear for the last several hours. I mean, I wouldn't want our sons or our daughters to see that. He is not fit to be president of the United States. He should not get anyone near the Oval Office. And to be quite honest, this is beyond partisan politics. The Republicans really have to seriously think about this right now. It's not just saying, hey, he shouldn't have said this, it's really thinking about, hey, this guy cannot be president. They need to unendorse him. he is not fit."