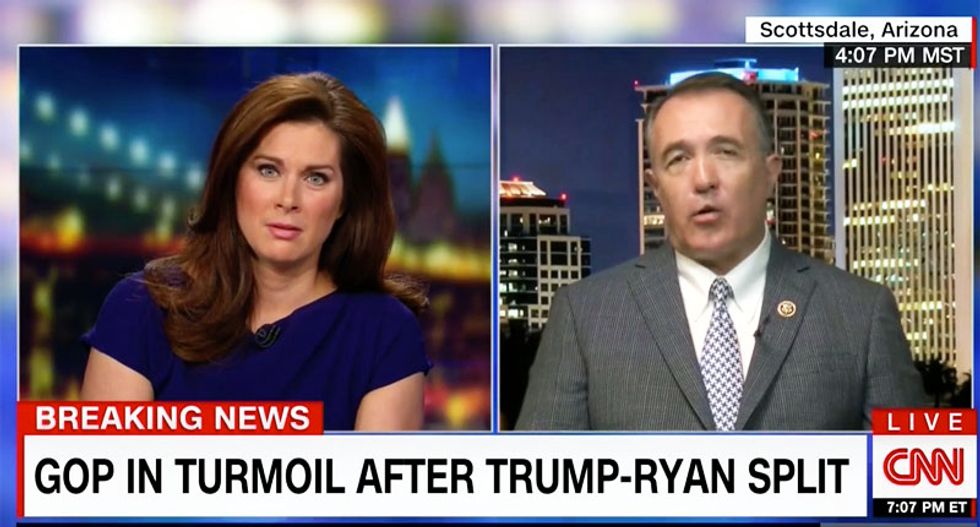 Invited on CNN's OutFront to discuss the fallout between the GOP presidential nominee Donald Trump and Republican party leaders, a Arizona congressman accused Hillary Clinton of having a hand in the murder of "little tiny women."

Arizona Congressman Trent Franks -- who can safely be called anti-choice -- was asked by host Erin Burnett to address Trump's comments about grabbing a woman's "p*ssy" after Franks direly warned about the threat of a possible Clinton presidency.

"What policies has she put forth that would support assault is this?" host Erin Burnett asked.

'Well the left has coarsened this culture in every way imaginable," Franks replied -- more than slightly off topic. "It is okay for adult men to walk into little girl's restrooms. It is okay to stand by with a golf club in your hand and watch ISIS sell little six-year-old girls into the slavery for 60 cents..."

Pulled up short in his ramble by Burnett, the host returned to Trump's comments about sexually assaulting a woman, only to have the conservative lawmaker accuse "the left" of "feigning outrage."

Assured by Burnett that people were legitimately outraged about Trump boasting about grabbing women, Franks went on to mansplain what should be outrageous to women.

"Let me give you one policy, " Franks ranted. "Donald Trump's words degraded and insulted women in the most flagrant possible way. And yet Hillary Clinton's policy is to allow the murder of a half a million little tiny women every year. And if she becomes president that could continue for God knows how long. That's a difference. The difference between degrading and insulting."

"So you think her being pro-choice is equivalent to him grabbing women's genitals?" a stunned Burnett replied.

"No, I think her standing by and supporting policies that allow abortion on demand for any reason, or no reason, throughout the nine months of pregnancy and she wants taxpayers to pay for it," he said in an attempt to convince her.