Since the late 1970s, American evangelicalism has been largely identified with right-wing politics. Conservative religious values entered the political sphere through movements such as Moral Majority and Focus on the Family that opposed gay rights, abortion, feminism and other liberal issues.

But, evangelical Christianity, as we have known it, is changing. While old guard evangelical leaders are vocally supporting Republican nominee Donald Trump for president, there is a groundswell of opposition from within evangelicals.

My research focus is on vibrant religious congregations. I am seeing the emergence of a new generation of evangelicals that has a very different view of what it means to be a “Jesus follower.”

This generation is abstaining from the political theology of the earlier generation and focusing their attention, instead, on improving the lives of people in their local communities.

The groundwork for American-style conservative evangelicalism was laid several decades before the rise of the Moral Majority and Focus on the Family movements. Evangelicals, and their forbears the “fundamentalists,” had long made education and mass communication a centerpiece of their efforts. 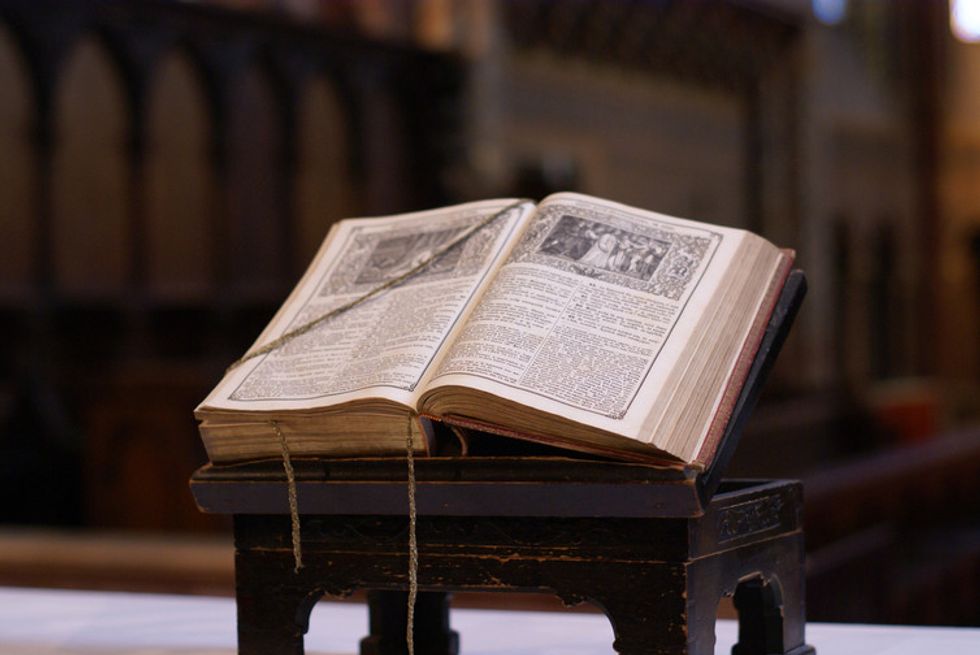 In the late 19th century, Bible training schools were set up.

Starting in the late 19th century, they established post-secondary Bible training schools and utilized various mass media outlets, such as their own magazines and radio stations to get their religious message out.

After World War II, these efforts expanded to include elementary and secondary schools – now numbering almost 3,000, along with approximately 150 evangelical colleges and seminaries in the U.S. In addition, evangelicals expanded their media efforts in publishing (books and national periodicals such as Christianity Today), radio and television.

Even though these schools and media outlets were independent from each other, they were unified in a shared theological and moral perspective that served to reproduce evangelical culture and beliefs, and to disseminate the religiously tinged political message of the religious right.

This once-unified movement is now dividing over whether to support Donald Trump in the general election.

Old guard evangelicals such as the founder of the Focus on the Family movement James Dobson and Jerry Falwell Jr., son of the Moral Majority founder and current president of Liberty University, are warning of dire consequences for the U.S. if Trump is not elected.

According to Dobson, without a Trump presidency, the U.S. will “see a massive assault on religious liberty,” which would “limit what pastors… can say publicly,” and would “severely restrict the freedoms of Christian schools, nonprofit organizations, businesses, hospitals, charities, and seminaries.”

But not all evangelicals are supporting Trump, even though they remain true to the Republican Party. These evangelicals are alarmed at what they see as the vulgar and immoral lifestyle that Trump exemplifies.

In the past, mobilizing this vast religious and political machinery would have resulted in overwhelming and unquestioning support for the Republican candidate. This was first seen with Ronald Reagan in 1980 who won the White House with widespread support of evangelicals, and has been repeated in each election since.

But this time, a call to support Trump has exposed deep divisions within evangelicals that have gone unnoticed until now.

The point is that Trump represents to many the very antithesis of the kind of moral probity that evangelical leaders have spent their lives defending.

Differences over social and moral issues

How did this happen? While the mostly white religious right was gaining political and cultural power over the last 40 years, evangelicalism became as much a political and racial identity as a religious or theological one.

Survey research and election polls have failed to differentiate the differences within the movement between whites, Latinos, African-Americans and Asians who all share the same basic evangelical theology, but who may part company over other social and moral issues.

For example, in most surveys and political polls, “evangelical” is limited to white believers, with others who may be similar theologically being classified into other racial/ethnically identified categories such as “Black Protestant,” “Latino Protestant” or “Other nonwhite Protestant.”

Further, as with all religious groups in the U.S., the evangelical movement began struggling to keep its young people in the fold. Recent research shows that among young adults who were identified as evangelicals as teenagers, only 45 percent can still be identified as such.

At its most basic level, American evangelicalism is characterized by a belief in the literal truth of the Bible, a “personal relationship with Jesus Christ,” encouraging others to be “born again” in Jesus and a lively worship culture.

This definition encompasses many groups that were not historically included in the old religious right. Thus, while Latino evangelicals believe the same thing about the Bible and Jesus as white evangelicals, their particular social context in many cases leads to a different political stance. 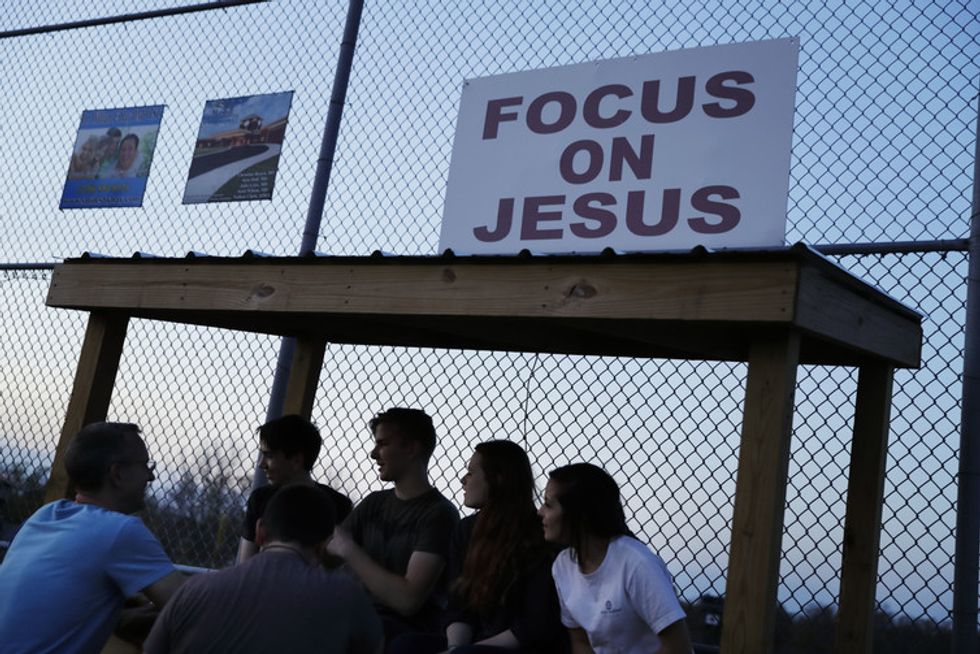 Youths sit under a sign at a baseball field during a gathering at dusk outside the Christian Fellowship Church in Benton, Kentucky.

As these new and growing groups find their own voices, they are challenging the dominant evangelical perspective on political issues such as immigration and economic inequality.

For example, the Evangelical Immigration Table, established in 2014, has been working across a broad spectrum of evangelical churches and other institutions to highlight what they see as the biblical imperative to support a just and humane immigration policy. These groups range from the Ethics & Religious Liberty Commission of the Southern Baptist Convention to the National Hispanic Christian Leadership Conference.

In addition, younger evangelicals are increasingly coming of age in more diverse neighborhoods and schools, leading to an openness to other racial and religious groups, LGBT people and social justice issues in ways that older evangelicals strenuously opposed.

Further, while the educational successes of evangelicalism, through its many and varied curricula, have served to socialize young people into the “biblically based” moral world, it has also taught them how to read the Bible critically and to pay attention to biblical themes and narrative through-lines that resonate with their own life experiences.

According to a pastor of a church included in my research, he is seeing young evangelicals apply the interpretive skills they have learned in school and church to a broader range of biblical teachings.

“When you start to examine the teachings of Jesus, you’re going to end up seeing that justice matters, that we have a responsibility to care for the poor. Younger evangelicals are basically using those same hermeneutical tools to study the Bible and are saying, wait a minute, not only is there nothing wrong with caring about justice, there’s something wrong with not [caring].”

Thus, while young evangelicals in some ways still evidence a shared theology with their parents’ generation – for example, on biblical passages that would support a “pro-life” perspective – they part company through their engagement with passages that emphasize the believer’s responsibility for the poor.

The younger evangelicals that I’ve been studying are not taking the expected evangelical position in this election, such as supporting Donald Trump, or supporting a broader agenda as that promoted by evangelical leaders such as James Dobson. 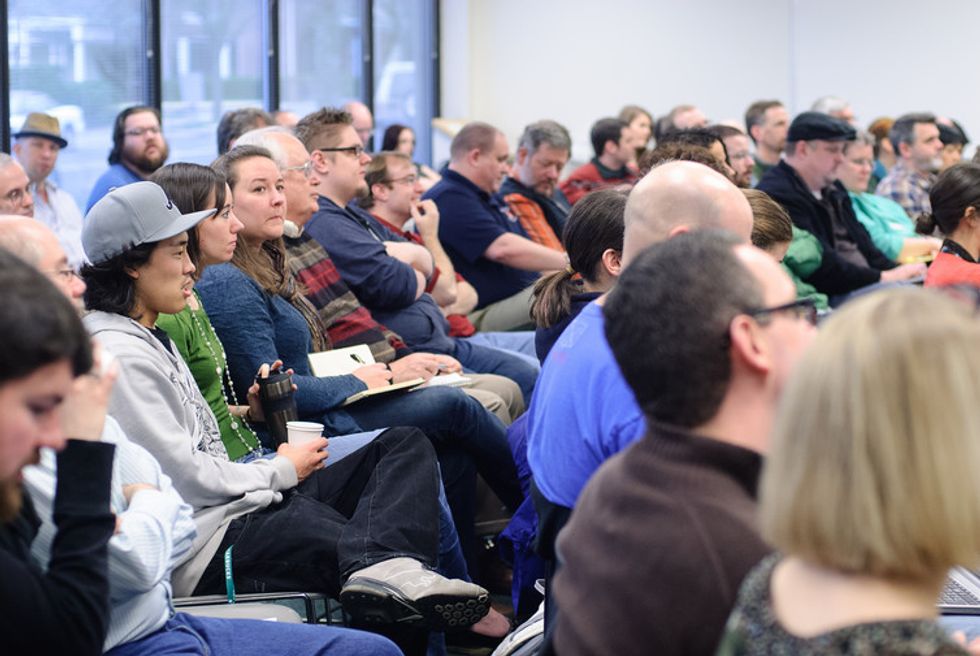 Instead, the political activism that these younger evangelicals tend to engage in usually relates to issues like improving local schools, creating job opportunities, caring for the homeless and other activities that have been largely overlooked by American evangelicalism as it has been practiced over the past several decades.

In my interviews, I’ve asked many of these younger evangelicals how their religious commitments relate to politics. Their responses show a simultaneous distancing from “politics,” and a desire to seek change in a way that is consistent with their beliefs. A good example of this kind of response came from a 20-something African-American young woman who told me,

“I also don’t care much for politics, because it’s so ugly. I just feel like, let’s commit to loving people. When I think about laws that unjustly affect minorities or the poor, that bothers me only because of the Gospel.”

These evangelicals have staked out a middle ground that is neither Democrat nor Republican, liberal or conservative.

This is not to say that younger evangelicals are all in agreement with how their religious views should be applied in the world. Rather, they are opting out of the political identities and battles that have characterized evangelicalism for the past 40 years.

Their world is more diverse in terms of race and ethnicity, social class, sexuality, and religious beliefs. Their friends are as likely to be straight or gay, Christian or Buddhist, or black or Latino.

That has informed the way that they understand their religious beliefs and their political alignments. They are seeking to live out their faith in response to a world that is different from the world that leaders of the old religious right inhabit.