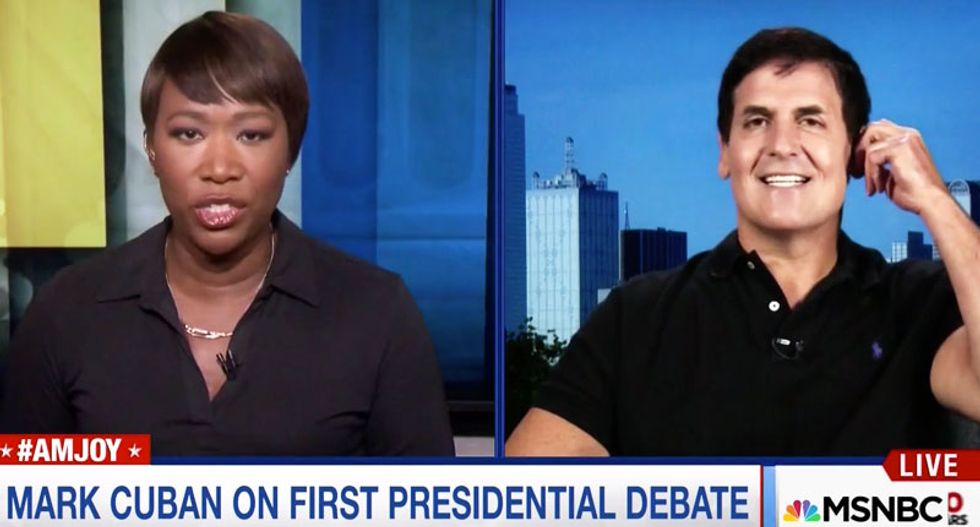 Billionaire Mark Cuban -- who had a front row center view of Monday night's presidential debate -- stated Saturday morning that GOP presidential nominee Donald Trump is losing control of himself and his campaign.

Appearing on MSNBC's AM Joy, the Trump critic -- whom host Joy Reid called "one of Trump's top three trolls" -- addressed the fact that Hillary Clinton managed to blindside Trump with her comments about his treatment of beauty queen Alicia Machado and now his ego has spiraled out of control.

Referencing Trump's 3 a.m. tweet storm over Machado, host Reid asked, "What exactly is going on with Donald Trump and his attitude toward women?"

"Well, first his attitude towards women, and there's a long history there, there's plenty of evidence there that he objectifies them and doesn't take them seriously," Cuban began. "But from a campaign perspective, you can see how flustered he is."

"When he starts ranting about 'Where did you get the information, where did that come from?' That goes directly to his feeling that he has lost control," he suggested. "I mean, I see in business all the time. When you ask somebody a question and all it takes is admitting there's a problem and dealing with the mistake and they question your sources, they question authenticity. When that happens, that shows that he's lost control.

"And the last thing Donald Trump -- even in his own alternate reality world that he lives in --  can't stand is the thought that he has lost control."