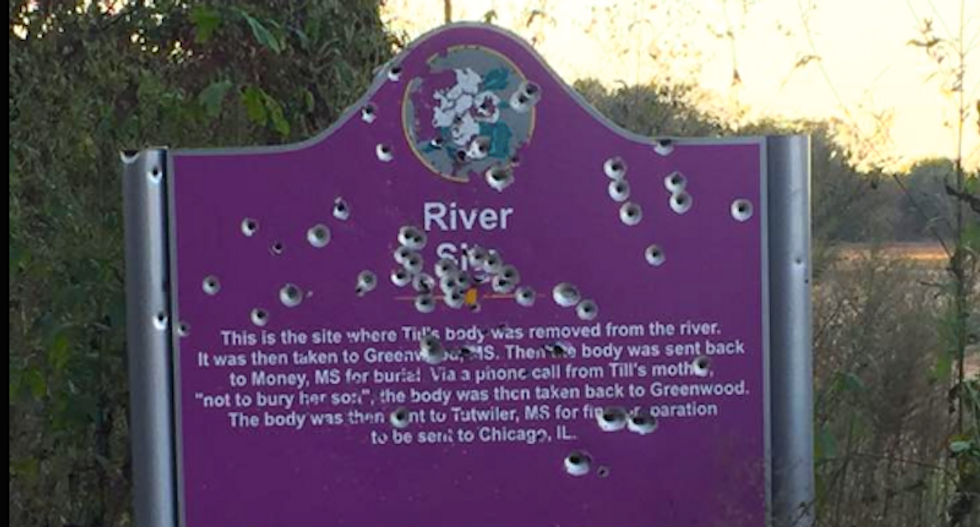 A sign marking the spot where Emmett Till's mangled body was found floating in the Tallahatchie River has been riddled with bullets -- while a similar sign marking the home of his killer is adorned with flowers.

The 14-year-old Till was kidnapped, brutally beaten and shot execution-style by J.W. Milam and Roy Bryant on Aug. 28, 1955, after the teenager whistled at Bryant's wife to impress his cousins and some other boys.

Related story: 60 years ago today, Emmett Till whistled at a white woman — and he was executed for it four days later

The men were acquitted after a brief trial, and Milam later said they were more worried about getting caught for stealing an industrial fan blade they used to weigh down Till's body than they were about killing the black child.

"I didn’t intend to kill the n****r when we went and got him – just whip him and chase him back up yonder," Milam told Look magazine in 1957. "But what the hell! He showed me the white gal’s picture! Bragged o' what he’d done to her! I counted pictures o’ three white gals in his pocketbook before I burned it. What else could I do? No use lettin’ him get no bigger!”

Local authorities tried to quickly bury his body, but Emmett’s mother, Mamie Bradley, requested her son’s remains be sent home to Chicago — where she held an open-casket funeral to show the world what had happened to her son -- and the black weekly Jet magazine published a photo of the boy’s mutilated remains.

The Emmett Till Memorial Commission put up eight signs in 2007 commemorating the boy’s death to help encourage tourism and raise money for a museum dedicated to his memory and for courthouse renovations in Sumner, reported Slate.

A Facebook user, Kevin Wilson Jr., recently visited the memorial marking the spot where Till's body was recovered -- and he found the metal sign had been shot dozens of times.

The signs have been vandalized, stolen and shot repeatedly since they went up nearly a decade ago.

One on U.S. 49 was stolen in 2007, and another in Tallahatchie County was damaged the following year -- when the original sign marking the site where Till's body was found was torn down by vandals.

Local authorities promised at the time to preserve the markers, saying they wanted to send a defiant message to the vandals.

But the replacement sign was riddled with bullet holes by 2013, and the same sign remains at the site where Till's body was located has endured even more gunshots from a variety of angles.

The Emmett Till Interpretive Center opened and the courthouse was renovated last year with the help of the Emmett Till Memorial Commission.

Milam, who died from spine cancer at 61 in 1980, became a pariah and suffered financial ruin after confessing to the murder following his acquittal.

But a sign marking Milam's home at the time of Till's execution has not suffered the same abuse as the memorial to the slain boy.

Locals have even planted flowers around the sign marking where Milam, who later lost his friends and became an itinerant farmer, lived when he kidnapped the child and committed one of the most brutal and notorious crimes in U.S. history.