MSNBC analyst: Comey is acting like a 'banana Republican' trying to overthrow the government 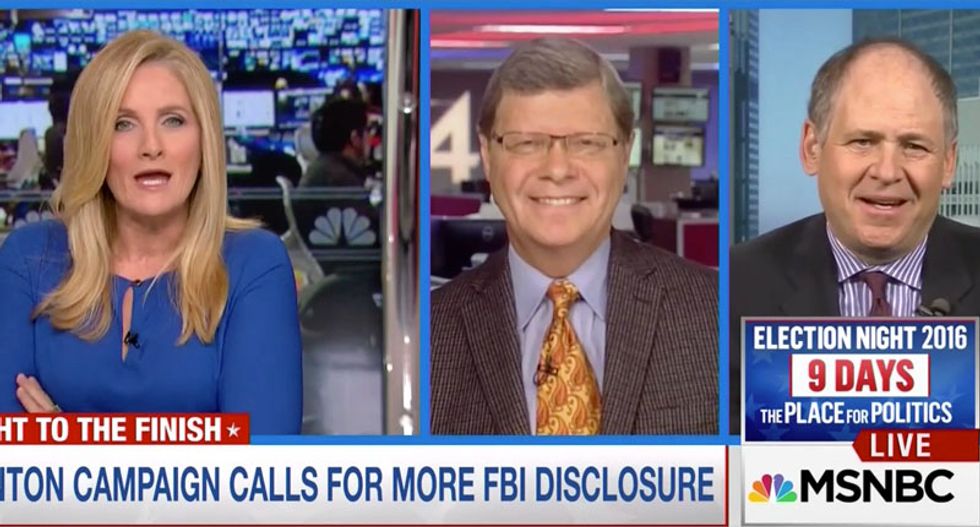 FBI Director James Comey's decision on Friday to release a letter on emails found on Hillary Clinton aide Huma Abedin's computer came under fire from commentators on both the left and the right on MSNBC, Sunday morning.

Conservative radio host Charlie Sykes hammered on Comey for what he called his "reckless" behavior saying, "He seems to have confused 'CYA' with his larger responsibilities."

"There is a reason we have the standards and the traditions and the protocols that say to the FBI and the Justice Department, you know, don't do this kind of thing right before an election," Sykes said. "And what he's done is placed this black box filled with innuendo and conspiracy theories and almost no new evidence in the middle of this political campaign."

"I agree with Charlie, he's more conservative, I'm more liberal," Alter began. "This is a question about what kind of country do we live in? James Comey has now joined other Republicans in being what you might call banana Republicans -- acting like they're in a banana republic. This is what happens in other countries. You throw up vague accusations that your political opponents are under investigation just before a big election."

"That's not the way we do it in this country. He broke guidelines that the Department of Justice has and he should be held accountable," he continued. "He should be under fire for breaking the guidelines and this story should be about James Comey, not about Hillary Clinton."

"If there is a bombshell here, let's know what the bombshell is," Sykes explained. "If it turns out they're duplicates, this is the most absurd moment of this entire absurd election year. I do want to put this in context to my conservative friends: prosecutorial misconduct is something we ought to be concerned about on both sides of aisle."