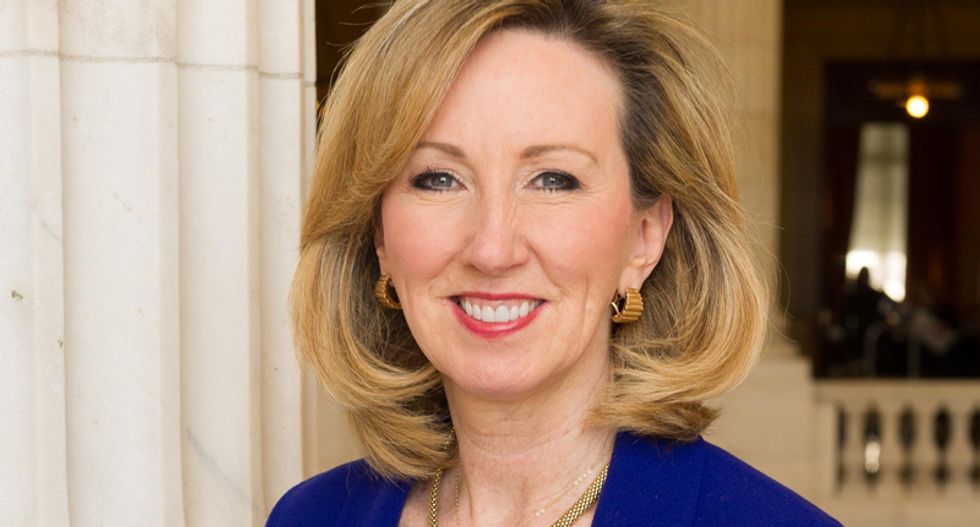 Like many fellow Republicans running for re-election to U.S. Congress this November, Representative Barbara Comstock has struggled to untether herself from Donald Trump.

In April, Comstock said the Republican presidential candidate was actually a Democrat who knows "nothing" about the economy. She said last December that Trump's plan to ban Muslim immigrants was "un-American" and "a silly idea."

In March, Comstock gave campaign donations she received from Trump to charity. Earlier this month, she said Trump's boasts about groping women were "vile" and announced she would not vote for the him, urging Trump to drop out of the race.

But despite her efforts, Comstock cannot escape the shadow of Trump in the fight to retain her seat in the U.S. House of Representatives. Her election opponent, Democrat LuAnn Bennett, takes every opportunity to tie Comstock to the New York businessman and his struggling White House bid.

"He (Trump) was a gift" to her campaign, Bennett said with a laugh. She says Comstock, 57, waited too late in her re-election campaign to announce she would not vote for Trump, and argues that Comstock's views on immigration, abortion and climate change are "shockingly similar" to Trump's.

"In a normal year, Comstock would be a clear favorite, but right now her front runner status is in question because of Trump," said Kyle Kondik, managing editor of Sabato's Crystal Ball at the Virginia Center for Politics.

The race in northern Virginia demonstrates how difficult it may be for Republicans, even those who have criticized Trump for months, to escape the impact of his controversial campaign for the White House against Democrat Hillary Clinton.

A recent poll by the Wason Center for Public Policy in Newport News, Virginia showed Clinton leading Trump by a whopping 55 to 21 percent in northern Virginia.

That suggests that for Comstock to win the race for Virginia's 10th district, some supporters of Clinton will need to "split" their tickets to vote for her.

Stretching from suburban Washington to the Shenandoah valley and the West Virginia border, the wealthy district is home to thousands of government workers, as well as many well-heeled lobbyists and what Trump might call the Washington "elites."

The area has been represented by a Republican in Congress since 1981, although it has been more of a swing district in presidential years.

"This is one of the most highly educated districts in the country, and it's filled with the kinds of Republicans that Trump could very well turn off. Additionally, the whole of northern Virginia has been trending blue" as more Democrats have been moving in, said Kondik.

Asked on Wednesday what voters thought of her repudiation of Trump, Comstock asserted that Bennett, a 63-year-old real estate executive, would be a "rubber stamp" for Clinton.

"I'm the only one of the two of us who has spoken out and has a record of speaking out against people, whether it's in my own party of not," Comstock, a Georgetown University-educated lawyer, told reporters. "I've made clear that I'm going to be my own woman."

Comstock announced that she would not vote for Trump after a 2005 video emerged on Oct. 7 of Trump making lewd comments about women. But the damage may already have been done.

"With the lewd tape, Trump went from being a drag on the Comstock campaign to an anchor," said Stephen Farnsworth, professor of political science and international affairs at the University of Mary Washington in Fredericksburg, Virginia.