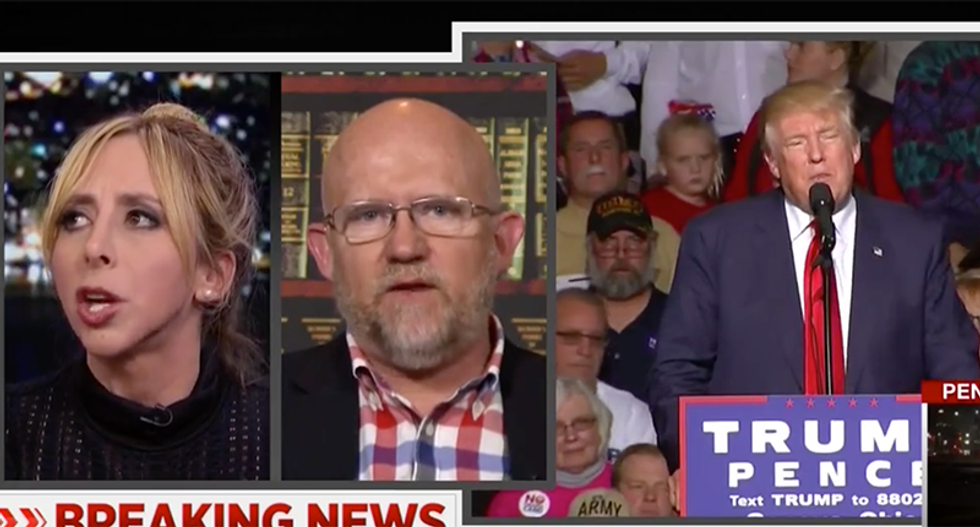 While appearing as a guest on "All In with Chris Hayes," to discuss Donald Trump's latest comments about African-Americans, Trump adviser AJ Delgado lost her mind after Hayes claimed that most Trump supporters are racists.

She began by saying that she was offended by Hayes' accusation that Trump supporters had ties to white supremacists.

"I just want to distinguish between two claims," Hayes began. "If you're a Trump supporter you're there for a racist or white supremacist which I would never say and don't think Rick would say. The people out there that are racist and white supremacist, they're overwhelmingly and publicly supporting Donald Trump."

"AJ, it is true. The people on the white supremacists alt-right movement in this country flock to Donald Trump," Republican strategist Rick Wilson shot back.

The two then began shouting at each other and talking over each other.

Delgado claimed that people don't care about this issue anyway and don't want to see two people arguing on TV about who has two white supremacist Twitter followers.

Wilson said that Trump should decry and denounce those like David Duke and others while also stop appealing to people like them with his dog whistle politics.

Delgado maintained that average voters don't care about these things, though the average person of color has indicated that they do.

"This is a guy who is feeding these people with a nod and a wink every single day," Wilson shouted back. "A guy who constantly denigrates women, Muslims, minorities in a host of different ways. I'm not saying every person who supports Donald Trump is a racist, that's absurd. Every racist you turn over -- every time you turn over a rock and find a racist, they have a red MAGA hat on. There is not a -- there's not a coincidence here."