WATCH: The View dissolves into laughter at Scottie Nell Hughes getting destroyed by Ana Navarro 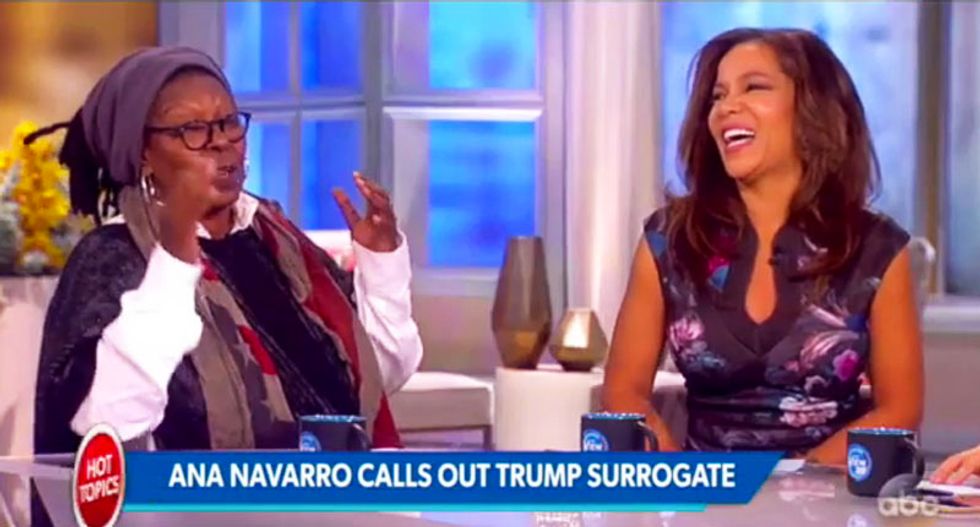 The all-women panel of ABC's The View had to wait all weekend to weigh in on GOP presidential nominee Donald Trump's vile "p*ssy grabbing" comments and, as you might expect, they were disgusted and mocked Trump's defense of it as "locker room" talk.

"It's a beautiful thing that everyone is abandoning him," co-host Joy Behar remarked.

"Even Arnold Schwarzenegger, another groper, is abandoning him. You can't even rely on a groper to stay behind you" she continued to laughter from the studio audience.

Whoopi Goldberg then jumped in to express appreciation for CNN contributor Ana Navarro who blew up at diehard Trump booster Scottie Nell Hughes on Friday night for whining at her for using the word "p*ssy" over and over again when talking about Trump.

Following the clip -- with the audience applauding and the panel laughing -- Goldberg added, "There's maybe more videos of Trump behaving badly. Producers of 'The Apprentice' claim they're sitting on a video of Don using the n-word. What a surprise!"