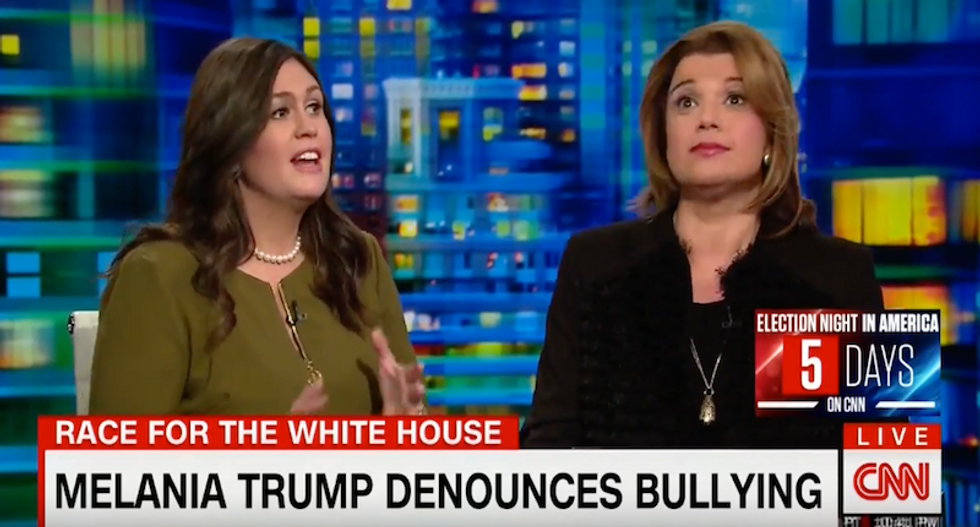 Republican nominee Donald Trump's wife Melania gave a passionate speech about cyberbullying during a campaign event for her husband on Thursday.

Panelists joined CNN anchor Don Lemon on Thursday night to discuss Melania's interest in the cause. Lemon started the segment with a chuckle, "She spoke out about online bullying — I wonder if it came as a surprise to her husband."

Republican strategist Ana Navarro joined the conversation as well with an important message for Melania. Before offering her opinion on the matter, Lemon read off some of Trump's mean tweets about himself and Navarro.

"He has called me a lightweight, dumb as a rock. He's called you a flunky, one of the dumbest people in politics, and said you have no talent."

"[It's] often time done under anonymity," she says. "Donald Trump does it on his own."

She offers Melania some solid advice and says, "If Melania Trump wants to something against online bullying, really, all she's gotta do is put a little melatonin in his night time milk, and maybe lullaby him to sleep."

"Take his phone away, tie his hands up," she continues as Lemon laughs with her.

She says she understands why Melania finds the issue important but that, "It's a very difficult argument to make when you're sleeping next to Donald Trump, who's tweeting at 3 in the morning and tweeting really ridiculous things."

"Her spouse is crazy!" Navarro continues, "And tweets crazy stuff in the middle of the night!"