Chomsky: Trump’s win puts government in the hands of the ‘most dangerous organization in world history’ 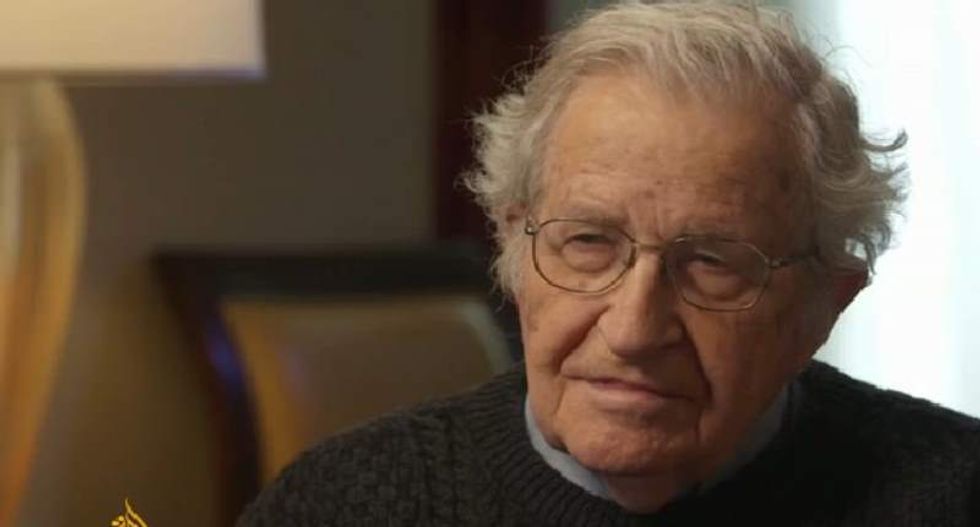 In an interview with TruthOut, political theorist Noam Chomsky warned the choice of Donald Trump will put the world at risk, saying the policy-averse president-elect may let the Republican party run amok.

"On November 8, the most powerful country in world history, which will set its stamp on what comes next, had an election," Chomsky said. "The outcome placed total control of the government -- executive, Congress, the Supreme Court -- in the hands of the Republican Party, which has become the most dangerous organization in world history."

Chomsky claimed that the impact on climate science alone was frightening.

"The winning candidate, now the president-elect, calls for rapid increase in use of fossil fuels, including coal; dismantling of regulations; rejection of help to developing countries that are seeking to move to sustainable energy; and in general, racing to the cliff as fast as possible, " he said before adding, "It is hard to find words to capture the fact that humans are facing the most important question in their history -- whether organized human life will survive in anything like the form we know -- and are answering it by accelerating the race to disaster."

Turning to how it was that Trump came to be elected, the lecturer and author said no one should be surprised and that he has been warning of a Trump-like demagogue for years.

"For many years, I have been writing and speaking about the danger of the rise of an honest and charismatic ideologue in the United States, someone who could exploit the fear and anger that has long been boiling in much of the society, and who could direct it away from the actual agents of malaise to vulnerable targets," he explained. "That could indeed lead to what sociologist Bertram Gross called 'friendly fascism' in a perceptive study 35 years ago. But that requires an honest ideologue, a Hitler type, not someone whose only detectable ideology is 'Me.' The dangers, however, have been real for many years, perhaps even more so in the light of the forces that Trump has unleashed."

Asked about the potential for Trump to return to the aggressive militaristic ways of the President George W. Bush era, Chomsky said that was an open question given Trump's erratic history of saying one thing and then contradicting himself moments later.

"I don't think one can answer with any confidence. Trump is too unpredictable. There are too many open questions. What we can say is that popular mobilization and activism, properly organized and conducted, can make a large difference," he remarked before adding ominously, "And we should bear in mind that the stakes are very large."