Colorado’s survivalists hunker down for the election – and the apocalypse 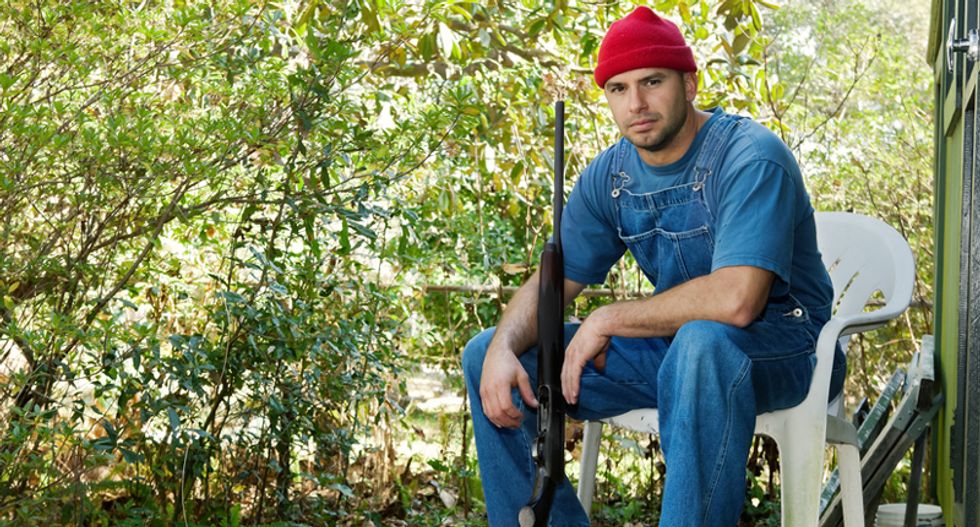 Handsome but threatening-looking man sitting in a plastic chair under a magnolia tree holding the old family shotgun. (Shutterstock)

Survivalists, also known as “preppers”, are people who embrace extreme disaster preparedness in anticipation of a possibly imminent total breakdown of society. The US has a long legacy of survivalist culture, and the archetypal survivalist is a pervasive, familiar stereotype: a right-wing macho-man paramilitary enthusiast hoarding weaponry in a nuclear bunker in the woods, poised to leave society behind and begin a new life “off the grid”.

Historically, survivalism in the US has revolved around consumption. It has been described as a symptom of the “anxiety of affluence”, an expensive hobby of accumulation and hoarding undertaken primarily by rich libertarian Midwesterners. This image has only been reinforced by the characters who populate TV shows such as Doomsday Preppers and films such as The Survivalist.

But the stereotype doesn’t quite hold true – and there’s a lot more to survivalism than so-called “disaster capitalism”. To find out more, I visited the western US state of Colorado just the US was slogging through the final act of Hillary Clinton and Donald Trump’s presidential tug-of-war. There, I spoke to survivalists who are preparing for what could be a very new era in American politics.

This is not the manpocalypse

Defying the image of a movement driven by paranoid fantasy, survivalist culture is in fact deeply rational. Being based in rural states where natural hazards and harsh weather are plentiful, survivalists have to be prepared for emergencies if they are to be resilient in the absence of outside help.

A current hot topic for emergency planners is resilience in the face of “climate change”, which has now taken its place alongside nuclear war, terrorism and malicious technology in the survivalist imagination.

The current wave of survivalism is more balanced than its predecessors. It has moved away from macho culture and the accumulation of stuff, and has a greater emphasis upon the development of survival skills and provision of community support – and a lot of this is down to a generational shift.

As I found when I met them, millennial survivalists are sociable, socially aware, and interested in ethical living and environmentalism. Like the millennial generation more generally, they are more centrist and left-wing than right-wing. They also reject much of our era’s darker side – the inundation of social media, individualism, and what many of them deem to be narcissism.

This all makes them a distinctive new breed. These newcomers are interested in sharing practical survival skills, not just developing them for themselves; they view resilience as something that demands strong community networks, not a matter of individual toughness.

I spoke to Daniel Spikowski, 26, part of this younger wave. He’s concerned about societal breakdown, but rather than hoarding tinned food, he’s working to develop useful skills and maintain his health. Consumption and hoarding, he told me, won’t keep you safe when society falls apart: “If you have a stockpile of things, then you’ll become a target for those things; whereas if you have a stockpile of skills, you’ll be the person that people work to keep alive … I’m not a big fan of guns in general.”

I asked him what he thought of the presidential race, and he said “I’m completely disillusioned, that would be the best way to describe it. I don’t know what to think, is the most accurate answer. I don’t have an opinion. You’re given two terrible options and you’re supposed to pick one or the other”. This antipathy towards both Trump and Clinton is echoed across his generation.

However, this new focus on gaining and sharing survival skills isn’t limited to millennials. I talked to Don Davis, 67, who has been a Fort Collins Search and Rescue volunteer since 1981. Don is a survivalist who apprenticed under the movement’s icon Papa Bear Whitmore 34 years ago. He offers free training in survival skills “to teach people how to take care of themselves and be prepared”. He described the traditional idea of survivalism as “extreme … a lot of those people are anti-government, they’re just waiting for the apocalypse or rapture. Some of them are conspiracy theorists.”

We talked about the impending election, and he told me “I don’t like to talk politics. I have to vote for the lesser of two evils. Trump is an unknown, and Hillary has a lot of negative baggage. As for Bernie [Sanders], well, socialism doesn’t work!”. Davis will be voting, but he’ll make his decision on the day.

Survivalism’s turn away from machismo and individualism says a lot about the sort of movement it is. Far from a bizarre fringe element isolated from the mainstream, its ebbs and flows say a lot about our contemporary economic and political climate.

In a fragmented age where hardline, far-right forces have suddenly returned to the fore, many communities feel less secure than they have in a long time. Survivalists have found an organised, material way of expressing their lack of faith in their government – which as they see it is less able than ever to protect them from a rapidly changing world.

Whatever the outcome on November 8, the survivalists will be ready.