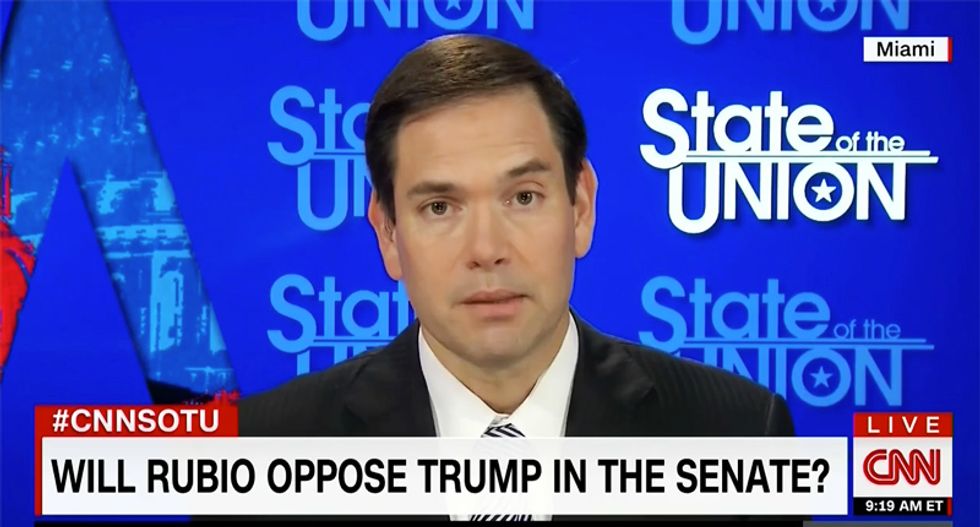 Florida Senator Marco Rubio (R) gave his full support to Donald Trump on Sunday morning but continued to hedge his bets when it comes to feeling comfortable handing over the nuclear codes to the president-elect.

Appearing on CNN's State of the Union, host Dana Bash reminded the Florida senator that he once called Trump unfit for the office of the presidency, and warned against "turning over the nuclear codes to an erratic individual."

"Senator, do you still have those concerns about President-elect Trump?" Bash asked.

"Well, Dana, we had an election," Rubio replied. "Ultimately the voters chose him both as our nominee and now as our president. The election is over and it's time to govern. We'll give him every chance to be successful. That's what I''m focused on now. At some point elections end and governing needs to begin."

"Senator, I completely get elections are over and now it is time for governing," Bash pressed. "But given the fact that it's time for governing and your criticism was about his abilities to govern, even as far as saying that he shouldn't have the nuclear codes because he's too erratic. What will you do as senator, as somebody who actually has the responsibility of check and balance, to make sure that he is governing properly given the concerns that you expressed?"

"The same as I would do with anybody else who is elected." Rubio replied, side-stepping once again before adding, "I feel comfortable voters have voted him to be the commander-in-chief."