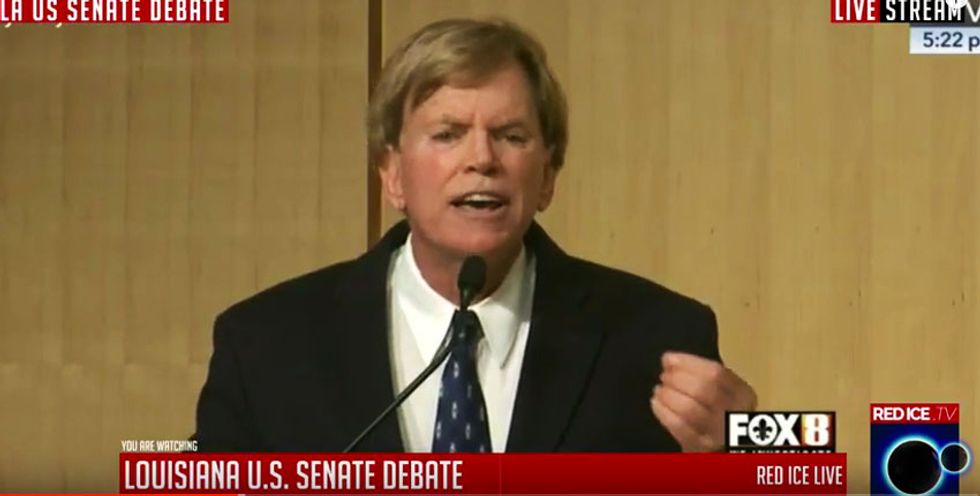 In a debate before an empty auditorium at Louisiana's Dillard University, former Ku Klux Klan head David Duke traded insults with his opponents and got into a screaming match with the moderator as the debate broke up and his rivals scurried away.

According to WGNO,  Duke barely qualified to participate in the debate between candidates seeking one of Louisiana's U.S. Senate seats.

Duke certainly made his presence felt. He called for Democratic presidential nominee Hillary Clinton to be put to death in the electric chair, and defended his special brand of anti-Semitism.

Asked about his attitude towards Jews, Duke replied, “I’m not opposed to all Jews. I’m against Jews or anybody else that puts the interests of some other place over our own country.”

Duke's opponents showed nothing but contempt for the former Klansman, with one of his rivals, Louisiana treasurer John Kennedy, sharing Duke's inmate number and calling him a "swindler," from when he was a federal prisoner after being convicted of felony embezzlement.

Caroline Fayard, added, "David Duke is a snake that slithered out of the swamp," with Foster Campbell contributing, "I have nothing in common with David Duke except probably that we’re both breathing.”

For his part, Duke ended the debate by wildly gesticulating and shouting at moderator John Snell who attempted to state for the record that Duke was not targeted by the government for his beliefs, but because he admittedly stole supporters' money to pay for his gambling habit.

As his fellow candidates quickly shook hands and dispersed, Duke remained on the stage bellowing at them as they left the hall.