Journalists ‘have to take a stand’: Jorge Ramos calls out media’s late reaction to Donald Trump 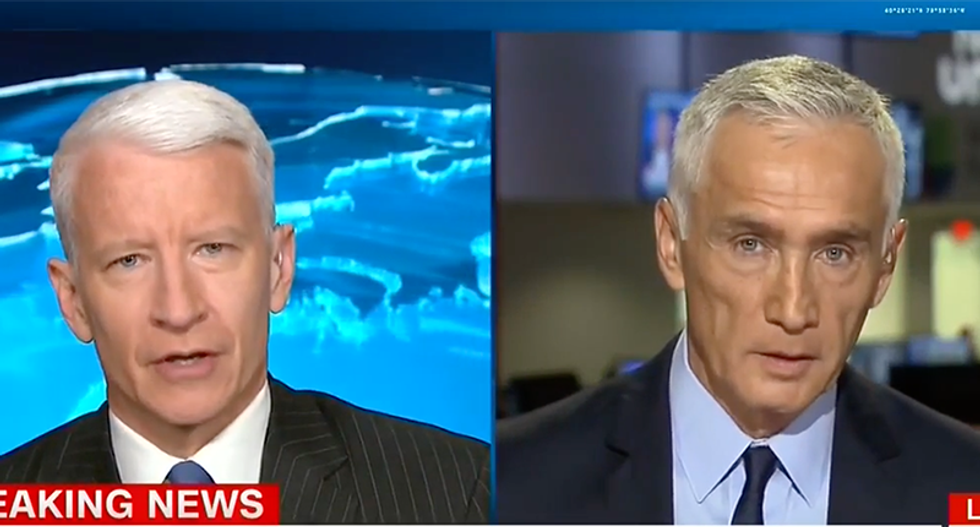 Univision reporter Jorge Ramos won't give Donald Trump a pass when it comes to the violence we've seen over the past few days since he's been elected.

There are reports of Latino children whose classmates are shouting "build that wall" at them and threatening to deport them. There are cases of minor female children having their genitals grabbed by boys, who say the president says they can do it. Racist and Nazi graffiti is popping up all over America. Ramos blames one person: Donald Trump.

"I think he's responsible for that," Ramos told Anderson Cooper on Friday night. "He emboldened groups that are expressing hate and dislike of minorities. When he said during the campaign 'Mexican immigrants were rapists and murderers,' words have consequences. If there's a headline for the Hispanic community right now, it would be fear. Fear of hate, fear of reprisals, fear of -- you know, I just saw a video from a Michigan school in which some teenagers were chanting, 'build the wall.' That language comes from Donald Trump, and the problem is that so far Donald Trump hasn't denounced that. That's the problem."

Trump's wife Melania has said that she plans to work on cyber-bullying when she's First Lady, but thus far she also has not come forward demanding these acts stop.

Cooper cited Monica Langley, who covered Trump for the Wall Street Journal. In an interview with the paper today, Langley asked Trump if his rhetoric went too far. Trump replied simply, "No, I won." It seems Trump doesn't care if his language is inspiring hate because his success proves it's acceptable. It's reminiscent of a mob mentality.

"He's responsible for his words," Ramos continued. "We have now a president who made racist comments when he was running for the White House. We have a candidate who made sexist remarks during the campaign. So, I think he's responsible for that. Not only that, I think he has emboldened many groups. He has -- before the election, many people were saying things in their homes that were private, that were politically incorrect for a reason. Now exactly that kind of language is what we are hearing. And after the election many people think that it is OK to say those things and it is not. It simply is not."

Ramos also places a lot of blame on the media itself. He explained that the press is normalizing Trump's behavior so that it becomes more acceptable when it isn't. "We have to remember who he is and what he said in the past," he said.

During the campaign, Ramos said that the same media didn't hold Trump accountable for a lot of these things.

"When you see racism, discrimination, corruption, I think as a journalist you have to take a stand and I took a stand," he said. Ramos famously was thrown out of a press conference and prevented from being credentialed on the Trump campaign just months after the launch of the campaign. "I don't regret that."

In fact, Ramos wants to see journalists hold Trump's feet to the fire more for his actions and words.

"I think one of the mistakes we made as journalists is that we not only didn't see the resentment growing in many corners of the United States and the fact we relied on polls and the polls were wrong," he said. "But also that we didn't ask tougher questions sooner. I think many journalists reacted too late to Donald Trump, but I'm at peace. I think I did what I had to do and I'm going to continue doing that."