Meet the women voting for Trump 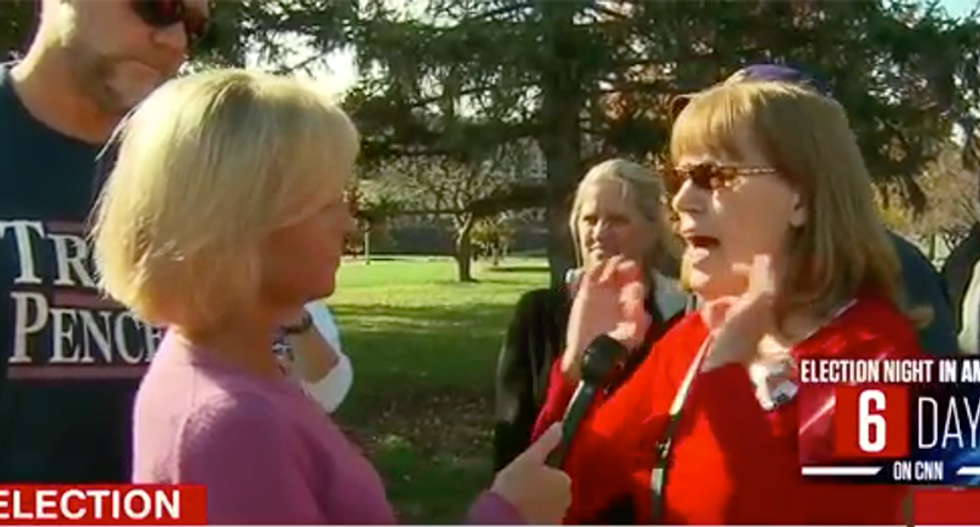 Carol Robertson is a staunch Donald Trump supporter. When asked about the sexual assault and rape allegations her candidate of choice is currently facing, Robertson told a CNN reporter that she thinks these women need to "grow a set."

"You know, it's been a lot of years. Get over it," she uttered, minimizing their experiences to nothing more than finding a strand of hair in a cup of soup.

While it's jarring to hear a woman defend sexual assault, Robertson isn't the only female who attends rallies for a candidate who has demonstrated on numerous occasions that he thinks of women as second class citizens who deserve to be called "fat pigs", or worthless if he doesn't consider them attractive.

Wisconsin voter Debbie Shields says she believes that Trump is a "loving and compassionate father who was chosen by God "for a time as this." Another Wisconsin woman who only goes by Shirley also told CNN that Trump's character flaws aren't really that big of a deal. She believes Democrats "have no issues they can win on, so all they can do is try to pick on Trump and his character."

When TYT field reporter Jordan Chariton asked an unidentified female Trump fan whether she would in the very least be happy about the possibility of Hillary becoming the country's first female president, she replied "Absolutely not. I don't believe there should be a woman President...I just don't believe it should be female leaders."

What I never seem to understand about feminist-bashing conservative women is their inability to see how ironic it is that they attend political rallies, share their opinions and cast their ballots when the America they're nostalgic about wouldn't allow them to do any of those things. If a woman thinks that females have no place in politics, why isn't she the kitchen making her husband a ham sandwich? Women are not to be heard, right? And to be honest, I wouldn't mind never hearing from someone that ignorant again.

With four days left until the general election, poll numbers indicate that Trump and Hillary are in a tight race. It's sobering to realize that there's a huge chunk of the U.S. voting population that doesn't think of sexual assault as something horrendous enough to disqualify a presidential candidate. When the topic of rape culture comes up, conservatives love to claim it's much ado about nothing. But the reaction, or rather inaction, to these rape allegations demonstrates how dominant rape culture is in America.

There have only been a few times when right wingers made a big deal about rape, and the most recent example had to do with the transgender community wanting to use bathrooms that they identify with. Think about how voraciously conservatives supported North Carolina's anti-LGBT law that would clearly discriminate against the trans community because they "worried" about the possibility of females getting raped in bathrooms.

The possibility of rape in bathrooms was Governor Pat McCrory's ridiculous fear-mongering argument in favor of the law even though there hasn't been any evidence to support the claim. On the contrary, Trump has been caught on tape talking about groping women, and grabbing them "by the pussy" without their consent. While Gov. McCrory condemned Trump's language as "disgusting" he hasn't turned his back on Republican candidate.

Aside from the more than dozen women who have come forward accusing Trump of assaulting them, his own ex wife Ivana accused him of violently raping her in the late 80s after he was furious about the plastic surgeon she referred him to. Trump's lawyer Michael Cohen defended his client by arguing that "by the very definition, you can’t rape your spouse."

"It is true,” Cohen added. “You cannot rape your spouse. And there’s very clear case law.”

This election unequivocally proves that right wing Trump supporters don't really care about the safety of women. Females have been a convenient prop to fit their discriminatory agenda, but when protecting them becomes inconvenient, the right kicks them to the curb. In fact, as soon as one of their own is accused of harming women in any way, they're indifferent to say the least.