Meyers: Obama tutoring Trump 'like if a burglar robbed your house and you showed him the valuables' 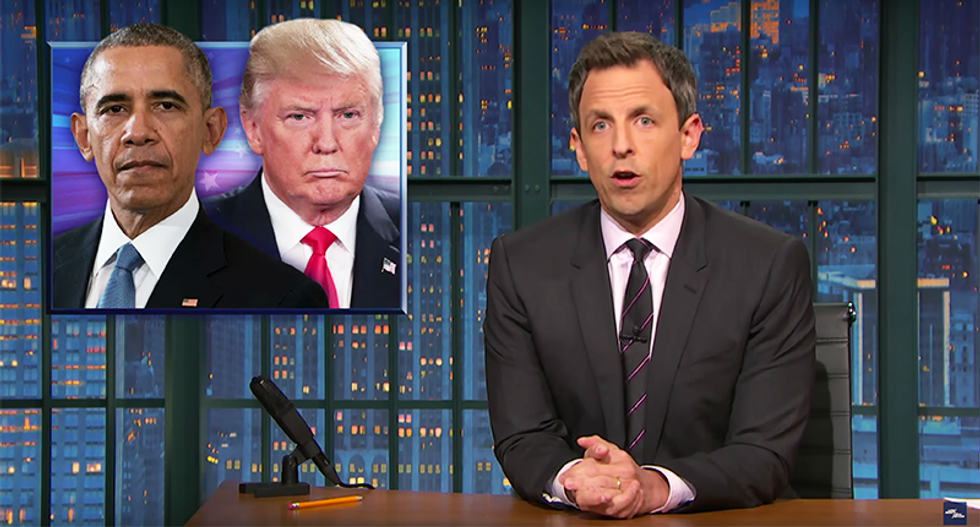 "Late Night" host Seth Meyers can't believe what a joke of a president Donald Trump has become in only a week.

His first example is how badly Trump has handled the anti-Trump protests. His own supporters may have threatened an uprising or a revolution if Trump didn't win, but ironically, they've been attacking the peaceful protesters and spreading lies about them. Famous right-wing sheriff David Clarke even tweeted out suggestions for fighting back against protesters, suggesting early curfews, mobilizing the national guard and tear gas. But before the election he was singing a different tune, telling Trump supporters, "It is pitchfork and torches time in America."

The most disturbing is that Trump surrogates are using the same language that authoritarian regimes used around the world use when people protest. Fox News is saying that the protesters are Communists, Anarchists and anti-Semitic people paid for by George Soros. None of which is true.

Meyers admitted that there are some people tweeting about not accepting the outcome of the election. He read one that said, "We can't let this happen. We should march on Washington and stop this travesty. Our nation is totally divided!" He then revealed that it was a quote from Trump in 2012 after Mitt Romney lost. Apparently, he changes his mind a lot. By 2018 we should probably expect him to tweet, "Very unfair to blame president for America's problems. This job is hard and I am SAD!"

Second, Trump seemed to embrace this new authoritarian position. Over the weekend Trump tweeted about how much he hated the media. Meyers predicts this is a sign of things to come and that Trump's attacks on the press will only get worse over time. Likely, they'll get worse as the media holds him more accountable than they did for the last 18 months. The media has been bending over backward to "try to pretend Trump's presidency isn't a threat to our institutions," Meyers said. "To give him a chance to try and undo 18 months of bigoted, unhinged rhetoric."

Yet, the media is still fawning over him. Pundits have been calling for the majority of Americans to give Trump "a fresh start" as if he's "been on a diet and just ate a cupcake," Meyers described. The media, instead normalizes Trump's behavior and tries to pretend like he's on par with every other president in history.

"Many in the media are doing everything to delude themselves and the nation into thinking this is a normal situation," Meyers continued. "That Trump's behavior and campaign promises don't pose a unique threat on fundamental American principals and norms. But fine, if they're so eager to see if a 70-year-old billionaire can change for the better let's give him this fresh start and see if he can surprise us."

Then Trump named Steve Bannon a senior White House advisor. "Well, we gave him a chance. Bye, chance! Thank you for stopping by!" Meyers said, waving.

Meyers begged media and Americans not to normalize Bannon's history of white nationalism as nothing more than controversial. "He's not pineapple on pizza," Meyers said. Bannon's Breitbart site recently accused President Obama of "importing more hating Muslims" and compared Planned Parenthood's work to the Holocaust. They've called conservative commentator Bill Kristol a "renegade Jew" and told victims of online harassment to "just log off" and stop "screwing up the internet for men."

Even Republicans are expressing horror at the idea of Bannon in the White House. Ana Navarro asked for a match so she could set her hair on fire. But when faced with a litany of deplorable things about Bannon, House Speaker Paul Ryan didn't use the opportunity to serve as a check and balance on the White House, instead he blew it off. "I've never met the guy," Ryan said.

Meyers couldn't understand. "I've never met John Wilkes Booth but I've let his past form my opinion of him."

Finally, the most concerning part of this transition is seeing just how completely unprepared Trump is to take office. Even President Obama seems worried. According to a Wall Street Journal article Monday, "During their private White House meeting on Thursday, Mr. Obama walked his successor through the duties of running the country, and Mr. Trump seemed surprised by the scope. After meeting with Mr. Trump...Mr. Obama realized the Republican needs more guidance. He plans to spend more time with his successor than presidents typically do."

That's all we need. "Now Obama has to tutor Trump on the presidency," Meyers said. "That's like if a burglar broke into your house and then you had to walk him around and show him where all the valuables are."