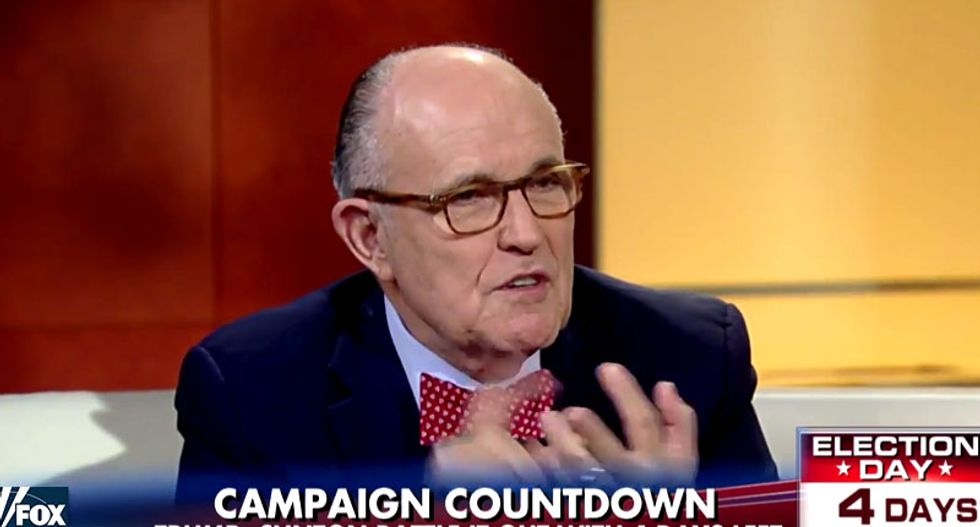 Rudy Giuliani and Jeanine Pirro were identified by The Daily Beast as part of an effort between politicized FBI agents and Fox News to prevent or undermine a possible Hillary Clinton presidency -- and they spent Friday morning doing just that.

The former New York prosecutors each suggested on "Fox and Friends" that Clinton and Attorney General Loretta Lynch should be prosecuted and jailed for alleged wrongdoing related to the Clinton Foundation.

Giuliani, who as a former federal prosecutor has extensive ties to the FBI's New York office, told "Fox and Friends" that all the retired agents he knows believe Director James Comey should have recommended charges for Clinton over her private email server.

The former New York City mayor boasted that a "big surprise" was coming two days ahead of Comey's vague and controversial announcement that Clinton's emails would receive another round of scrutiny, and now he's pushing for Lynch to be investigated for obstruction in that case.

"From that point on, I've been hearing from the retired agents that the Justice Department was obstructing the investigation of the Clinton Foundation, which might, in fact, be more serious because it would be a vast fraud, multimillions of dollars," Giuliani said.

Co-host Brian Kilmeade asked Giuliani, who had just suggested an FBI employee be fired for leaking information to John Podesta, how he learned about the email probe, and he said former agents told him about it and that he expected Comey's announcement three or four weeks ago.

"There’s a revolution going on in the FBI, and it’s now at a boiling point," Giuliani said.

He said "honest FBI agent(s)" were profanely furious that Clinton refused to turn over medical records to prove she suffered memory problems due to a concussion, but he denied playing a role in Comey's statement.

"I did nothing to get it out, I had no role in it, (but) did I hear about it?" Giuliani said. "You darn right I heard about it, and I can't even repeat the language that I heard from the former FBI agents."

Pirro, the former Westchester district attorney and failed state attorney general candidate, said hacked evidence dumped online by WikiLeaks makes a "clear case" for why Clinton "has got to go to jail."

"Yeah, this is a case of RICO, it's a racketeer influence corruption organization -- like the mob, yeah," Pirro told "Fox and Friends."

"She's the capo, and then they've got the consigliere, who's Loretta Lynch at this point," Pirro added.

She said she'd spoken to Giuliani about Lynch, and they both agreed the attorney general had corrupted the Justice Department.

"How does the FBI do an investigation without access to a grand jury, and an investigation this serious, this weighty, that impacts all of us, where millions and tens and hundreds of millions of dollars are being exchanged with other countries while she's in a position of power," Pirro said. "I mean, this is just the most corrupted Department of Justice I've ever seen -- and I thought Eric Holder was bad."