Seth Meyers: Trump hats should come with a disclaimer — because his promises are a ‘f*cking lie' 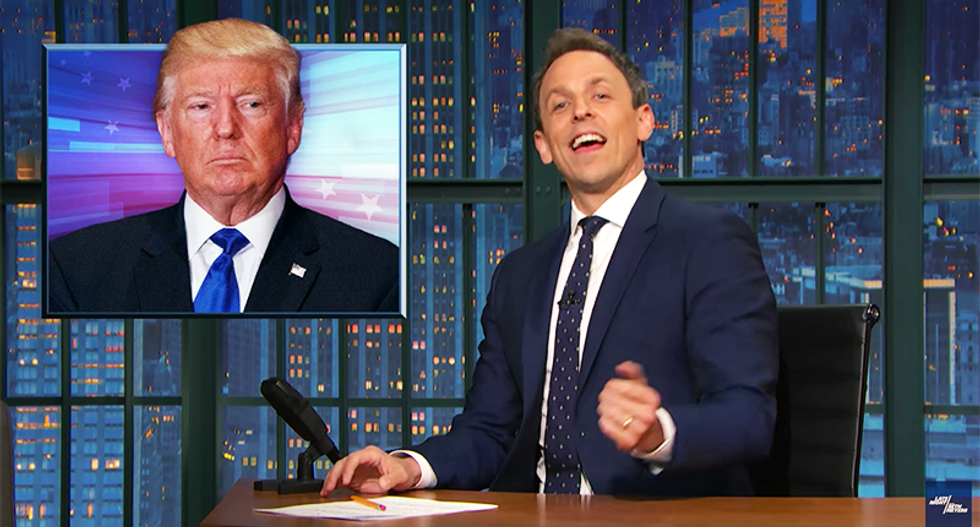 The Donald Trump transition has turned into some kind of right-wing knife fight among Trump loyalists. "Late Night" host Seth Meyers wondered how exactly this is going to work, especially when Trump is breaking his most important campaign promises in the first week.

"You've got incoming chief of staff and elf on a shelf Reince Priebus, who comes from the establishment wing," Meyers began. "And then you've got Steve Bannon, the former executive chairman of Breitbart News, a website adored by white nationalists. While the establishment may be relieved by Priebus as the chief of staff, history indicates he'll probably be less powerful than Bannon."

Meyers played a clip of a Lawrence O'Donnell interview with political analyst Jonathan Alter. In the interview, Adlter explained that people are comforted by Priebus, but if we look back at the George W. Bush White House, it was Karl Rove in the Bannon spot. If that's any indication of who's really running the show, it's going to be all Bannon. "He will eat Priebus for lunch," Alter said.

"Are we sure he didn't already?" Meyers wondered.

Meyers also noted that the more information that comes out about Bannon, the more troubling the hiring seems. He pointed out that even conservative commentator Glenn Beck thinks that Bannon is the wrong choice. “You know the world has gone insane when Glenn Beck and Bernie Sanders are on the same page,” Meyers said. "For them to be on the same page, the book has to be one page long."

Then there are the conflicts of interests that are coming up surrounding Trump's children as they begin to take over their father's business empire. In the debates, Trump said that his kids would take over, but when he was asked if he'd put his assets in a blind trust he seemed not to understand what that was. "For a guy who's always talking about how good he is at business he sure doesn't seem to understand basic business terms," Meyers mocked.

Meyers then began his hilarious but terrible Trump impression. "Blind trust? No, thank you. I would never trust a blind person. For one thing, they wear sunglasses inside. That's very shady if you ask me."

The conflicts of interest became even more obvious during the "60 Minutes" interview Sunday when Ivanka Trump used the opportunity to try and sell her nearly $11,000 gold bracelet from her own accessory line. “Did you hear that, disenfranchised white working-class voters?” Meyers asked. “For only $11,000 you can make your wrist great again!”

Ultimately, Meyers settled on the "back-pedaling" that Trump has been doing on his campaign promises. Thus far, Trump has reneged on building "The Wall" on the Mexican border, claiming he's OK with it being a fence in some places. Trump is also pulling back on his pledge to "repeal and replace Obamacare." Instead, he's fine with just making some changes and improving it.

Trump also claimed he'd end the war on coal and bring back jobs for the coal industry. However, the coal industry is dead, not from environmentalists, but by the free market. Even Senate Leader Mitch McConnell admitted it's impossible. Trump won't be deporting all 11 million undocumented people. He's said that he's really only going after those "criminals in the country illegally." Finally, he's backtracked on the Iran Nuclear Treaty the GOP fought so hard against. Close advisors to Trump say that he's thinking of looking into renegotiating it rather than scrapping it. The list grows larger as the days go by, but Newt Gingrich explained all of these were just a "campaign device" to get elected.

“A campaign device, or in layman’s terms, a f*cking lie,” Meyers said. “Hey, honey, now that we’re married I’m not going to give you a beautiful house and the three children after all. That was an engagement device.”

As it turns out, those red hats that say "Make America Great Again" on them, had an asterisk next to the word "great." Meyers explained that the footnote in that said this: "Great is in no way a legally binding term. Customers shall assume responsibility for all consequences and liabilities that may result from making America great again. Also, for every one person who perceives something as great, there will be 10 to 15 people who perceive it as bad or terrible. Offer void in America."

Sorry, Trump voters. Check out the video below: