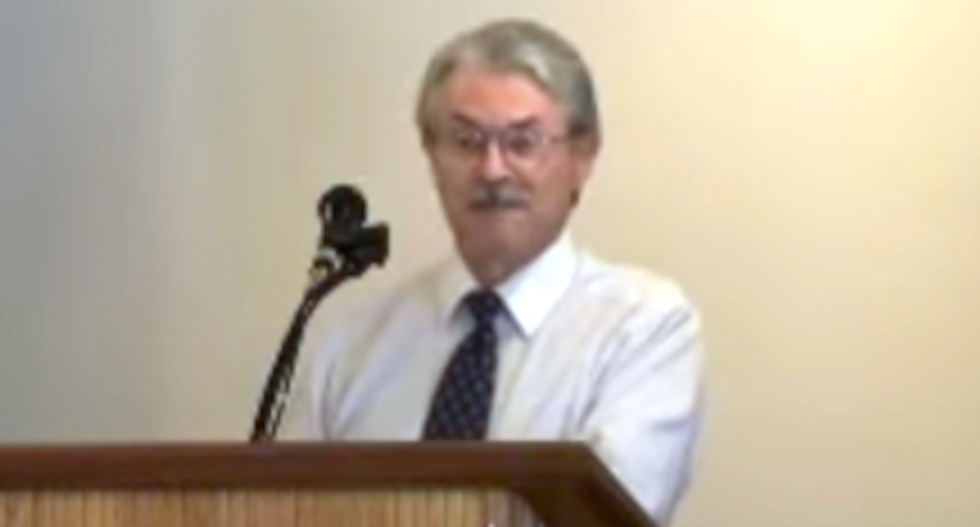 A white supremacist church leader is feeling emboldened by Donald Trump's election win -- but not bold enough to tell reporters where his group worships.

Downey, however, sees Trump's election as an opportunity to enter the political mainstream.

"I am an outsider, about as non-partisan as a liaison with Providence and a potential President could be," Downey wrote. "Nevertheless, I wouldn't be wasting my time if there was the possibility that you could be the called out one to lead us out of the terrible mess we're in."

The letter, which was written Oct. 9, suggests that "divine destiny" will lead Trump to victory, and he called on the Republican to disavow mainstream evangelical Christianity and endorse Christian Identity's extremist ideology.

"The wolves in evangelical clothing will not tell you the following things to do, because for the most part, they are shabbez goi, which means they are the lackies for their Jewish masters," wrote Downey, who essentially encourages Trump to recast himself as a religious leader.

"If you want to make America great again, it is imperative that we isolate ourselves from a world gone crazy," Downey wrote. "It is madness to impose other morals and values upon this once great Christian nation. Think of it: a White Christian America as envisioned by our founding fathers or a third world melting pot that has no identity, no heritage and thus no future of greatness. No other religion will make America great again. Have you ever heard 'No King but Jesus'?"

Downey cited anti-Semitic conspiracy theories that influenced Adolf Hitler, whom he's praised, to beg Trump to crack down on the media.

"You've been a media player for years (and) the media is run by the Jews. It goes all the way back to the Rothschilds," Downey wrote. "It's a fact, that six Jewish companies control 96% of the world's media. And boy, do they have an antichrist agenda."

Although most Americans are unaware of Christian Identity teachings, the sect's beliefs influence Ku Klux Klan and neo-Nazi groups -- who have outspokenly endorsed Trump -- as well as anti-government militias and the "sovereign citizen" movement.

“Only one race answers to the Holy Bible scenario of Israel in the latter days, and that is the White Race,” Downey wrote.

Downey told a reporter that his congregation met in Florence, Kentucky, although its mailing address is in nearby Alexandria, but he stopped returning calls when the journalist identified his profession.

Another northern Kentucky church, Fellowship of God’s Covenant People in Union, lists Downey as its pastor.

The last time Downey, who claims he ran for state legislature in 1994, got anywhere near mainstream politics was in 2014, when he urged his congregants to cast write-in ballots for a neo-Nazi candidate for the U.S. Senate who also lived in Florence.