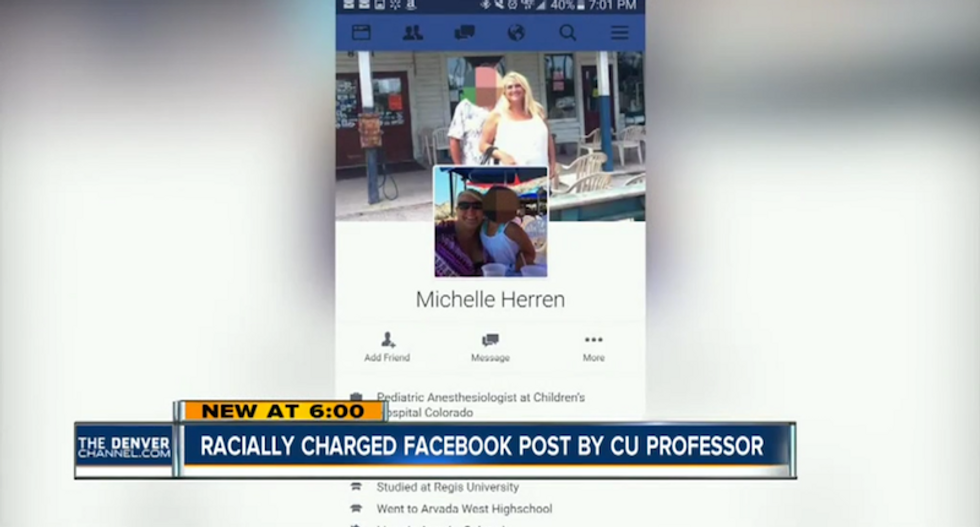 An anesthesiologist with Denver Health is facing backlash over her racist Facebook remarks about First Lady Michelle Obama, the Denver Post reports.

Dr. Michelle Herren responded to a post about Obama'e eloquence, which also noted that the first lady was a graduate of Princeton University and then Harvard Law.

Herren wrote, "Doesn’t seem to be speaking too eloquently here, thank god we can’t hear her!" She added, "Harvard??? That’s a place for ‘entitled’ folks said all the liberals!"

JoAnn Nieto, a friend of the original poster told the Denver Post that she was outraged by the comments, and especially after learning where Herren worked. "It really outraged me to see that she works at Denver Health, which serves a huge minority population," Nieto said.

Herren's comments got progressively worse. In a following comment, she wrote, "Monkey face and poor ebonic English!!! There! I feel better and am still not racist!!! Just calling it like it is!" But she is "still not racist."

"Hiding behind the excuse that you're not racist, doesn't negate the fact that you are being racist," Nieto said, according to ABC 7 Denver.

Raw Story has written about similar racist comments about the first lady in the past, including from a West Virginia mayor, an Alabama police officer, and a Georgia teacher.

Herren, who works at Denver Health is also listed as faculty on the University of Colorado School of Medicine’s website, according to the Post. Nieto said she informed both Denver Health and the CU Board about Herren's comments.

"I think you have to hold yourself to a higher standard as being a public employee, as well as being a professor in such a critical field," she explained.

The University of Colorado released the following statement:

The University of Colorado School of Medicine offers a setting of excellence and compassion in teaching and caring for everyone in our community. Insensitive, derogatory and racist statements are unacceptable and inconsistent with our mission.

John J. Reilly, Jr., MD, dean of the School of Medicine, has communicated directly with Dr. Herren regarding her statements posted on Facebook. He reminded Dr. Herren, who is an employee of Denver Health, of her responsibilities as a faculty member to conduct herself with civility. The School of Medicine is reviewing the details of this matter and will ensure that its students and trainees and the patients who are served by our faculty are not exposed to unacceptable behavior.

A spokeswoman with the hospital, Kelli Christensen wrote in a statement, "Until further notice, Michelle Herren, MD, will not be seeing patients or providing anesthesia services at Denver Health." Denver Health also wrote that they were disgusted by Herren's comments, but cannot "terminate any employee for their off-duty comments."

The hospital is looking into further disciplinary action.

See the segment from the Denver Channel below for more.