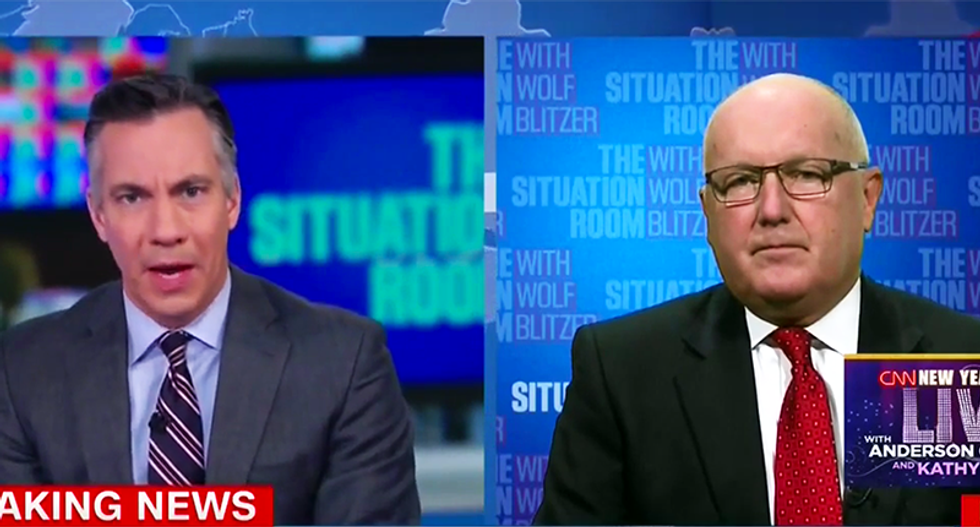 CNN host Jim Sciutto hammered a former Republican Congressman who once served as the Intelligence Committee chair on Friday.

"What better behavior?" he asked. "By hacking the U.S. election, annexing Crimea, backing a stealth invasion of Ukraine, violating negotiated US/Russian nuclear weapons how is that model behavior?"

Hoekstra said that those examples weren't model behavior but that Trump was talking about Putin's statements made last night.

"Does he?" Sciutto asked, rhetorically. "How does he know it better? What's interesting here, Congressman Hoekstra, is that Donald Trump and his closest circle of advisers are isolated. Not opposed just to the Democrats and the Obama administration but virtually the leadership of their entire party. The House Speaker, Republican, the Majority Leader, Republican, senior Senate Republicans pushing for even stronger sanctions against Russia. They all say Russia hacked the election and the US needs an even stronger response. You have a president-elect who has not even granted the premise that Russia was behind this cyber attack."

Hoekstra then attempted to excuse the actions of Russia because "we all know that espionage is something the United States engages in versus Russia, China, Iran, North Korea." He continued citing Edward Snowden, saying that the self-exiled hacker "even demonstrated that we do this against people like the Germans and the French."

Sciutto explained that there are more countries than just Russia that have cyber capabilities. He cited past incidents from China, North Korea and Iran and asked Hoekstra how these countries will see the Russian interference.

"He's given no indication of punishment for Russia," Sciutto said. Why would the other nations, including Russia, look at that and be deterred at all from attacking the U.S. via cyber means again?"

Hoekstra repeated the Trump talking points that there is no evidence that Russia hacked the U.S. to influence the election.

Sciutto seemed to get mad at that point.

"I'm an American and I listen to that, I hear foreign actor hacked into political organizations in the U.S. and they strategically leaked it out during an election campaign," he said. "Whether that's Republican or Democrat or any other party, that sounds serious. Are you saying, 'heck it's another part of the Wild West in the cyber space and we as a country should let that pass?'"

Hoekstra said he doesn't think it should pass but he was dismissive because the U.S. hacked Angela Merkel and listened to conversations.

Sciutto was shocked to hear a former Republican Congressman say that these actions were acceptable because the U.S. had hacked someone before.

"But leak those conversations every day leading up to a crucial German election?" Sciutto asked. "This is the difference here. It's odd for an American to be equating its own actions with the actions of a foreign adversary."

He later explained that he sees a clear distinction between hacking a country and using it in a campaign and hacking it for security purposes.

"Let's be frank, targeting one party during that campaign, that's the difference," Sciutto continued. "Here's the thing: There are distinctions in the cyber space. Look at China. The U.S. I'm sure hacks China, China hacks the U.S., but China hacks U.S. companies, steals intellectual property, and uses it for economic gain. The U.S. does not do that. okay? I'm sure the U.S. hacks Russia and yes, it's true the U.S. was eavesdropping on foreign allies but it doesn't take the stem that the U.S. intelligence community says Russia takes and that your Republican colleagues, such as the Grahams and McCains of the world and Paul Ryan and McConnell's of the world say that Russia did."

After the interview, Republican Rep. Adam Kinzinger said that he overheard Sciutto's interview with Hoekstra and is grateful that the former Congressman is no longer in office.