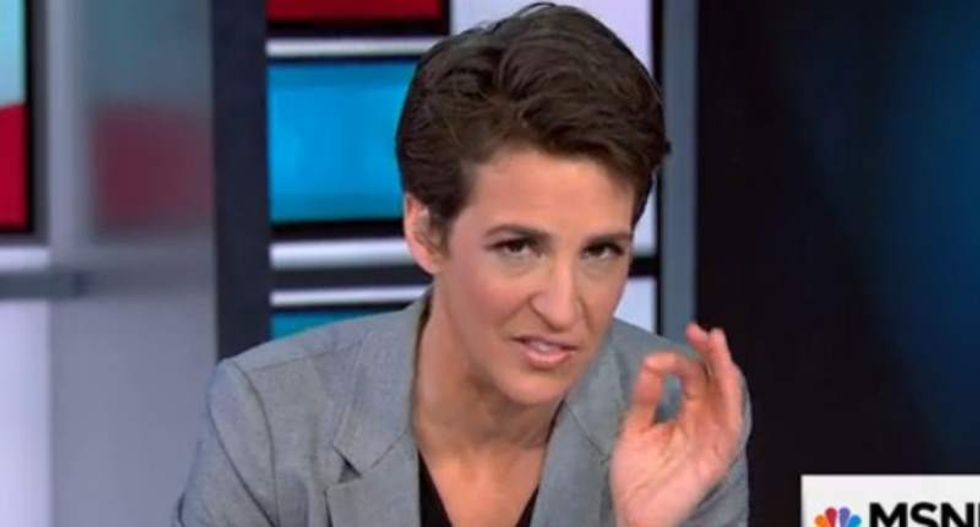 In a preview of a Newsweek article due to be released Tuesday morning, MSNBC's Rachel Maddow explained that reporter Kurt Eichenwald has uncovered evidence that President-elect Donald Trump may have already been compromised by a foreign leader holding the power to threaten his overseas holdings to gain a political advantage.

According to Maddow, Trump has a business relationship with the Doğan family, owners of Doğan Holding, which is building twin towers in Turkey bearing the Trump name for which the Trump family stands to make millions of dollars.

"Now Newsweek reports that Turkey has figured out how to turn that to their advantage and how to put the president of the United States over a barrel in the process," Maddow explained.  "On December 1st, the top representative of the Doğan company, in Turkey's capital city, got arrested by the Turkish police. Again, Trump as president-elect had taken an official call from the Turkish president and used that occasion to tell the Turkish president how much this one particular company meant to him, going so far as to name specific executives."

According to Maddow, President Erdoğan had the founder of Doğan Holding, as well as an executive arrested on "threadbare" charges that both were involved in an attempted military coup that happened in Turkey this past summer.

Maddow then got to the heart of the matter.

"Turkey desperately wants the U.S. government to extradite an imam [Turkish cleric Fethullah Gulen]," Maddow explained. "They [the U.S.] have said that they are not extraditing him. But if that's what you wanted, what if you could squeeze the personal financial interests of the American president as a way to get what you want from the American government?"

"I mean, the Trump family and the president-elect themselves, they stand to make millions of dollars from their relationship with the Doğan group in Turkey. That will stop if they get locked up," she continued. "So they started locking them up. Nice leverage, right? It would be one thing if it was business leverage -- but it's leverage against all of us as Americans."

As Eichenwald notes in his article: "If Erdoğan's government puts more pressure on the company that's paying millions of dollars to Trump and his children, revenue flowing from that tower complex in Istanbul could be cut off. That means Erdoğan has leverage with Trump, who will soon have the power to get Gulen extradited."