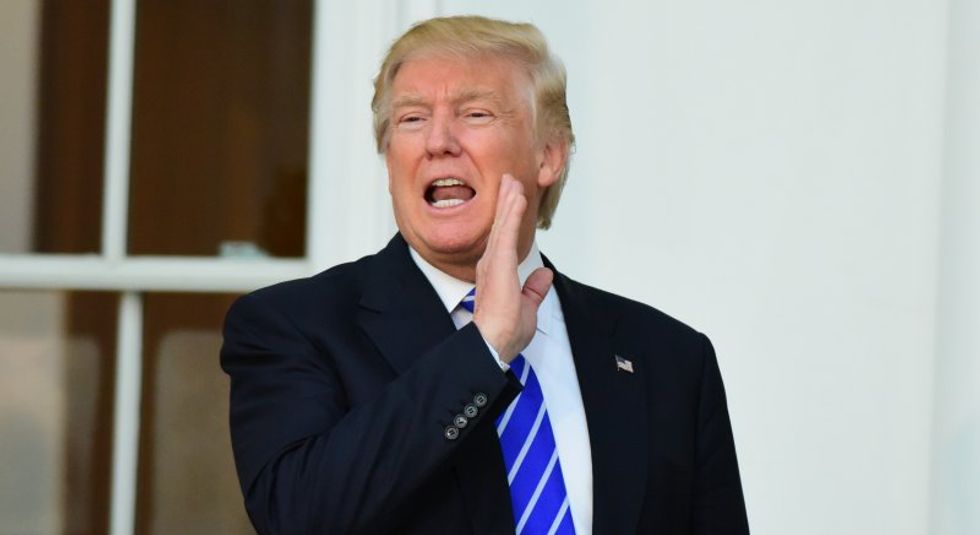 Donald Trump is already cozying up to foreign dictators to boost his family's real estate development company -- even though he promised to focus on the public's business instead of his own.

Kurt Eichenwald details some of the shady ties Trump has cultivated and continued since his election last month in a bombshell Newsweek report published Tuesday that may have led the president-elect to postpone his promised news conference on his business dealings.

"The president-elect vowed during the campaign to eliminate potential conflicts by severing ties to his company — yet, with only weeks to go until he takes the oath of office, he hasn’t laid out a credible plan," Eichenwald wrote. "Trump’s sole suggestion to date — a 'blind trust' run by his children — would not eliminate the conflicts, given that the money generated would still go to his family. Moreover, such a trust would be anything but blind."

Trump on Dec. 2 called Rodrigo Duterte, president of the Philippines, who said the American endorsed his brutal massacre of suspected street criminals and drug addicts that has left an estimated 4,500 dead.

The rest of the international community has condemned Duterte's vigilante campaign -- but the Filipino president says Trump invited him to the White House.

"The Trump family has an enormous financial interest in keeping Duterte happy," Eichenwald wrote. "Trump Tower at Century City in Makati, Philippines, is on the verge of completion, with potential buyers having placed deposits on at least 94 percent of the condominiums, according to Century Properties, the Trump Organization’s business partner there."

His sons, Donald Jr. and Eric, took part in a photo opportunity at the site during the presidential campaign, and their sister is selling some of her jewelry on the building's website.

"The Trump family has an enormous financial interest in Duterte’s deadly campaign," Eichenwald reported. "Rooting out crime in the Philippines is good for the real estate values."

Trump agreed to put his name on the project in exchange for a multimillion-dollar payment up front, along with up to 25 percent of the developer's revenue over a number of years.

Jose E.B. Antonio, the head of Century Properties, was recently named by Duterte as the special government envoy to the U.S. -- which means Trump will be discussing Southeast Asia policy with one of his or his children's business partners.

"The Trump family’s dealings in the Philippines will set off a constitutional crisis on the first day of Trump’s presidency, if anyone in the federal government decides to abide by the law," Eichenwald wrote.

Many have argued that Trump would violate the the Constitution’s Emoluments Clause — which prohibits office holders from accepting gifts or payments from foreign states -- but Eichenwald said his conflicts in the Philippines go beyond that.

"The man writing millions of dollars’ worth of checks to the Trump family is the Duterte government’s special representative to the United States," Eichenwald wrote. "To argue that these payments will be constitutional if they are paid to the Trump children, and not to Trump personally, is absurd. This conflict demands congressional hearings, and could be an impeachable offense."

Even if Antonio is removed as envoy, Duterte hold immense leverage over Trump, according to Eichenwald.

"Trump won’t simply forget that the Makati building exists, that the authoritarian Philippine president has the power to damage the Trump family’s financial interests there and that the protection of what is now a high-profile target for attacks is in Duterte’s hands," he wrote.

A Taiwanese mayor revealed to The China Times that a representative from Trump's company had visited the country to express interest in building a hotel near her city's airport, and he also said Eric Trump would visit the island by the end of the year.

Mental illnesses such as obsessive compulsive disorder, depression and addiction are notoriously hard to treat and often don’t respond to drugs. But a new wave of treatments that stimulate the brain with electricity are showing promise on patients and in clinical trials. In this episode of The Conversation Weekly podcast, we talk to three experts and one patient about the history of treating mental illness, how new technology and deeper understanding of the brain are leading to better treatments and where the neuroscience of mental illness is headed next.