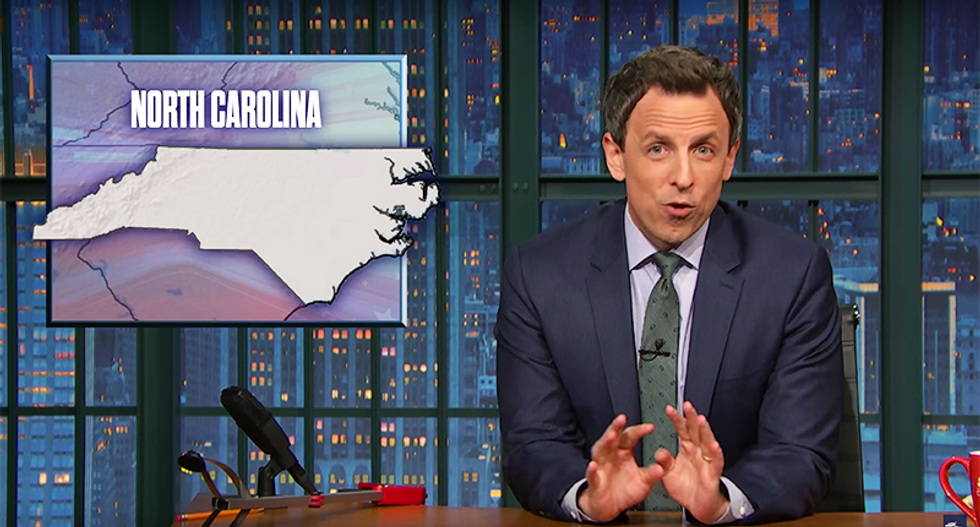 If President-elect Donald Trump won fair and square, wouldn't it also stand to reason that North Carolina's Governor-elect Roy Cooper also won fair and square? One wouldn't think so, given the maneuvering the state's legislature has done over the last week to prevent Cooper's office from having any real power.

The idea that a sitting governor can be so mad about losing an election that he prevents anyone else from being able to hold the office is the kind of power grab a governor throwing a tantrum would have. "Late Night" host Seth Meyers associated it with losing a bet and paying in "Monopoly" money.

Oddly enough, when the previous North Carolina governor, a Democrat, was on his way out, they actually expanded the number of appointments a governor could make. Now, the GOP legislature is requiring that the Republican-held legislature be the one that can approve cabinet posts. They also changed the rules so that Democrats control boards of election in odd-number years and Republicans control in even-numbered years.

"Why did they give Democrats odd-numbered years?" Meyers asked. "Because in odd-number years, there are no elections. It's like winning Yankee season tickets for all games between November and March."

The only reason that the GOP even has the majority it has in the legislature is because it passed laws like this that keep them in power. A court ruled earlier this year that many of the districts are racially gerrymandered and unconstitutional.

"Basically, they drew some districts to group together as many African-American voters as possible to dilute their political power," Meyers said, showing a map of Congressional districts in the state. One district is so convoluted that Meyers said it resembles either a dragon or "300 years of institutional racism."

Understandably, the voters in the state were furious and took to the halls of the Capitol, "knocking on the doors of the Senate chamber demanding to be heard," Meyers described. Footage from the protests even show Santa Claus being arrested while shouting "This is my building!"

"Though to be fair he is wanted on like 8 billion counts for breaking and entering," Meyers joked.

Protests were peaceful, however. They were so peaceful, in fact, a protester invited a police officer over for Christmas dinner. When protesters refused the leave, one friendly exchange sounded like this:

"I do need you to leave the third floor right now though," the officer said.

"I know you do, but you know I—" the protester began.

"Let me tell you if you don't leave I'll have to arrest you for second-degree trespassing," the officer warned.

"I understand. I'm good with that," the protester responded.

"You're good with that? OK, I'll give you one more chance. Will you please leave?" the officer begged.

"I need you stand up. I'm going to arrest you for second-degree trespassing," the officer instructed.

Meyers called it the most polite police-protester interaction he's ever seen. "Instead of handcuffs, he locked her up in friendship bracelets," he joked.

Yet, despite that, the Republican Party chair said that the power grab was acceptable because the incoming governor would still have other duties as the head of the state.

"Roy Cooper still going to be the governor," GOP ED Dallas Woodhouse said. "He still gets the keys to the mansion at some point on January 1st. He still gets to use the big ballroom."

Meyers wondered if he also got a typewriter so that he could work on his novel as well. But Woodhouse argued that because Democrats attempted to do something similar, though on a significantly lesser scale. He claimed that anyone who thought the GOP was trying to strip the incoming governor of his powers was being naive.

In an interview with Chuck Todd on "Meet the Press," Woodhouse was asked if he thought what was being done was "wrong." He explained, "Chuck, I think wrong is beholder of whose ox is getting gored. That is the way it's always been in these things," Woodhouse explained. "Hey, guess what Chuck, next thing you know you'll say, I mean, come on. They're gambling in Casablanca."

A confused and shocked Meyers wondered if he had playing cards sitting there with him ready to flash. Woodhouse is basically the Carrot Top of politicians. Maybe he was playing poker while he was doing the MTP interview, no one really knows.

Amusingly enough, Woodhouse's brother is Brad Woodhouse, a professional Democratic operative. They once went on CSPAN together and received a call asking if they'd put their political differences aside. It was their mother.

"I'm your mother and I disagree that all families are like ours. I don't know many families that are fighting at Thanksgiving," she said. "I was very glad that this Thanksgiving was a year that you two were supposed to go to your in-laws and I'm hoping you'll have some of this out of your system when you come here for Christmas."

Meyers said that he hopes the boys can put aside their issues over the holidays and take stock of all of the things we take for granted.

"Things like living in a stable healthy democracy," Meyers said. "But democracy isn't something that succeeds on its own. If it's going to survive we have to fight for it. We can't just sit on our ass and let the fat cats grab our rights," he closed, armed with his plastic claw.